The parents of a nine-year-old schoolboy in Texas have reacted with outrage after discovering their special needs child was kept locked in a ‘focus room’ for hours [1]on end while being told to sit in a circle drawn on the floor. 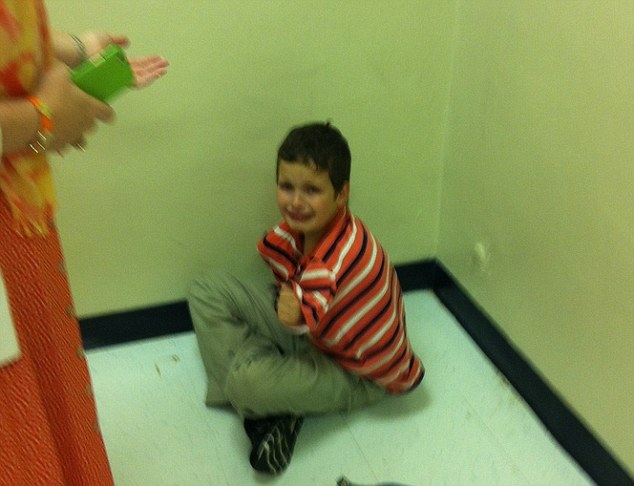 The boy’s father, a 40-year-old businessman, said: ‘My wife had been attending school with our son for the week, with the school’s permission, to address his behavior. She had been to classes with him in the morning, and came back to our house to have lunch with me, but when she returned to the school she was told he was serving an in-school suspension because he had been disruptive at lunch time. She asked to go and see him, because she was supposed to be observing his day in school, but the principal told her she couldn’t go. She asked again, and that’s when the principal started to get really agitated, so she became suspicious and insisted on being taken to our son, and was eventually lead to this room.’

He said his wife was ‘horrified’ to find her child shivering in the corner of the bare room, which was empty except for a yoga ball for an instructor to sit on. He added that the air in the room was ‘frigid’ and that there was not even a window to the outside. Alex later told his parents that he had been sent there to sit in a circle for 90 minutes, in order to ‘earn’ 90 minutes back in the classroom.

He added: ‘We have been trying to help the school in order to deal with Alex’s behavioral issues, but that is obviously not the way to deal with them. We don’t know how long this has been going on for, but when we asked him about it, he told us it was the ‘focus room’ and it’s where he had to go when he had been bad.’

Speaking to Khou 11, a spokesman for the school said that because of privacy laws they were unable to say whether Alex has special educational needs, or why he was placed into the room. Initially the school sent a letter to parents outlining the difference between a ‘safe room’ and a ‘focus room’, saying the former is a safe space for children who presented a risk of harm, while the latter is a ‘classroom environment’ used for ‘behavior intervention such as social skills and counseling’.

However, speaking to Khou on Saturday, a school district spokesman clarified the statement, adding: ‘In this instance, it was a safe room that was used that are mainly used when the student is either a harm to himself or others.’

This school needs to be shut down and the people who ran it kicked out of any job having to do with children permanently!