It’s understandable to send out a gift request list out with birthday party invites is the child has special needs or a physical disability or something similar, but one mother went a wee bit overboard in the email she sent out to potential guests. In said email, she asked for several large, expensive items[1] including a $64 water table from Walmart. She goes on to say that if a guest wants to give a gift which is not on the list, a receipt must be included for return purposes. 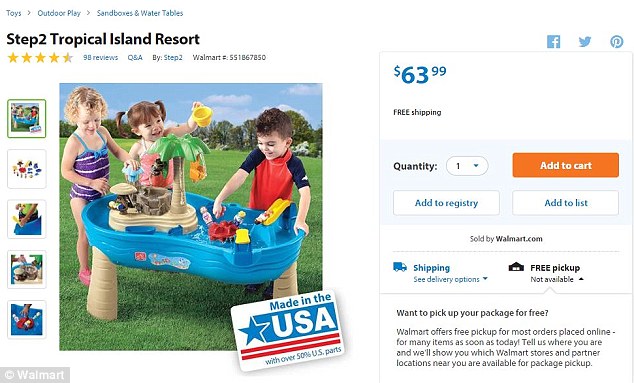 A mum has come under fire for sending out invitations to her son’s first birthday in which she lists very specific requests for the boy – including some rather large and pricy gifts.

The unnamed woman, whose email was shared by a recipient yesterday on Reddit, demands a $63.99 water table from WalMart, a $19.99 play tent, a $14.99 play tunnel from Ikea, and a $7.99 Cheerios book, writing: ‘If you are unable to get these items, please let us know so we can buy them right away for him.’

She even goes as far as to require that her guests include a receipt with their gifts so that she can get the full value back if she needs to return them. 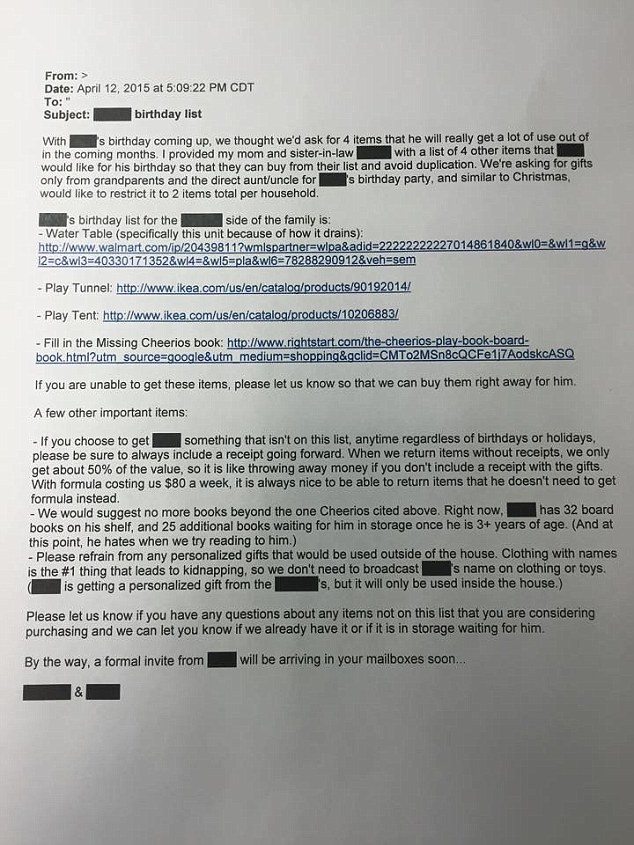 The recipient of the email, who deleted the child’s name from the email, labelled the post ‘Most demanding 1st birthday invite ever’, sparking an online backlash against the pushy mum.

The invitation reads: ‘When we return items without receipts, we only get about 50% of the value, so it’s like throwing away money if you don’t include a receipt with the gifts.

‘With formula costing us $80 a week, it is always nice to be able to return items that he doesn’t need to get formula instead.’

She assigns specific presents to each member of the family, explaining: ‘I provided my mom and sister-in-law [retracted] with a list of 4 other items that [retracted] would like for his birthday so that they can buy from their list and avoid duplication.

‘We’re asking for gifts only from grandparents and the direct aunt/uncle for [retracted]’s birthday party, and similar to Christmas, would like to restrict it to 2 items total per household.’

The mother also asks that the gifts do not have her son’s name on them, claiming that personalised goods attract kidnappers.

The letter reads: ‘Please refrain from any personalized gifts that would be used outside of the house.

‘Clothing with names is the #1 thing that leads to kidnapping, so we don’t need to broadcast [retracted]’s name on clothing or toys.’

And she adds that her son does not need any more books than he already has.

‘Right now, [retracted] has 32 board books on his shelf, and 25 additional books waiting for him in storage once he is 3+ years of age. (And at this point, he hates when we try reading to him,) she says.

The mother concludes the letter: ‘Please let us know if you have any questions about any items not on this list that you are considering purchasing and we can let you know if we already have it or if it is in storage waiting for him.

‘By the way, a formal invite from [retracted] will be arriving in your mailboxes soon…’

The email has been viewed more than a million times on Reddit, with web users voicing their outrage in the comments section.

One person said: ‘This child is going to be a spoiled f****** nightmare as an adult.’

Another commented on the mum’s knack for sucking the fun out of what should be a celebratory occasion, writing: ‘Why is this written in the format of a company memo that is demanding harsh behavioral changes from its staff?’

So what do you guys think? Was the mom right in asking for things she wanted for her son? Was she wrong to demand that everyone who gives a non-listed gift include the receipt?