After Empire’s Tajari P. Henson issued a scathing indictment of the officer who pulled over her son, claiming he was racially profiled, she quickly released an apology on her Instagram. Her son, who was caught on dash cam running a red light and admitting to the possession and use of marijuana,[1] was let go with only a ticket and a warning by the accused officer. 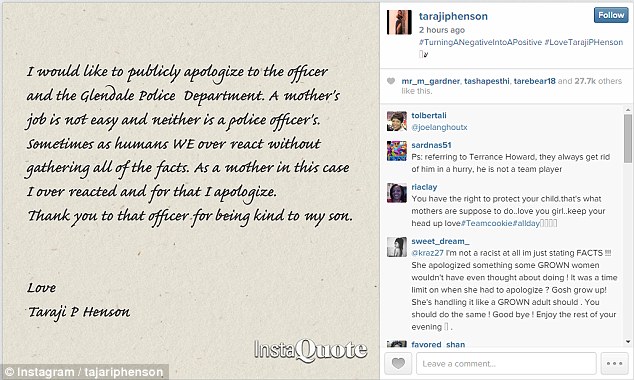 Empire star Taraji P. Henson has issued a groveling apology to the LAPD admitting her son was not racially profiled.

The actress unleashed a scathing attack on officers earlier this week, accusing them of pulling over her 20-year-old son Marcel ‘for no reason’ to ‘illegally search his car’ in Glendale, California, in October.

But after the force released dash-cam footage showing the car streak through a red light, Henson has backtracked.

The video, released on Friday, shows Henson admit to having marijuana and Ritalin on him, before an officer also finds hash oil, a grinder and a knife.

After a short and calm conversation, the officer lets Henson drive off without a ticket.

Hours later, his mother wrote on Instagram: ‘I would like to publicly apologize to the officer and the Glendale Police Department. A mother’s job is not easy and neither is a police officer’s.

‘Sometimes as humans WE overreact without gathering all of the facts. As a mother in this case I overreacted and for that I apologize.

‘Thank you to that officer for being kind to my son. Love Tajari P. Henson.’

Henson made headlines earlier this week after telling Uptown magazine: ‘It was bogus because they didn’t give him the ticket for what he was pulled over for.’

Under questioning, Henson told officers that he had a prescription for the marijuana but could not find it.

He said he did not have a prescription for the Ritalin and that a friend had given it to him.

However the officer, speaking calmly, lets him drive on without a ticket.

The dashcam footage was obtained by The Los Angeles Times, which noted that race did not seem to be a factor when Henson was first pulled over.

‘I am not going to give you a citation for running that yellow because that would actually put a moving violation on your driving license, and you are going to have to go to traffic school and all that stuff, so I am helping you by not giving you a violation on it. All I am going to do is take the weed from you,’ the officer can be heard saying in the video.

The officer told Henson he could go to court with the citation and show proof he has a prescription for medical marijuana.

Otherwise he could just pay a fine.

‘It felt like this was a little better than the other one,’ the officer said.

‘I am giving this to you too because you smoked weed about two hours ago… and a warning if you have Ritalin on you and you’re not supposed to, don’t do it.

‘That’s a big violation and I wouldn’t want to do that to you.’

The boy’s mother made her controversial comments to Uptown magazine earlier in the week.

And this, ladies and gents, is why you don’t jump to conclusions when you don’t have all of the facts. And you CERTAINLY don’t just pull out the race card when you feel like it. This officer didn’t deserve all of the negative attention he got because of an uninformed opinion. I am proud of her, however, for being big enough to apologize when she was proved wrong.
Endnotes: