MSNBC Worries Hillary Crowd Too White, Small, and None Too Enthusiastic

LOLWUT?  The main reason for Hillary’s “official” campaign launch yesterday is because her actual official campaign launch a few months ago was panned by the media, and upstaged the next day by Marco Rubio.  So they (re)launch the campaign…and it’s even getting panned by MSNBC[1]? 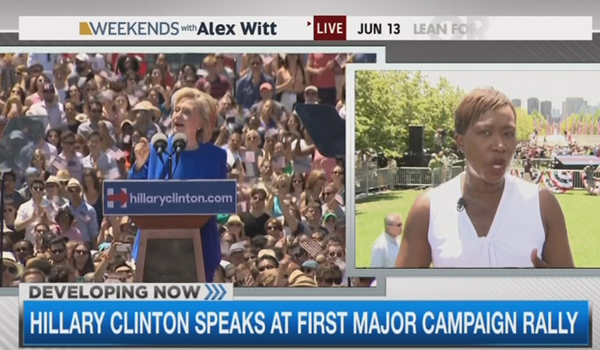 ALEX SEITZ-WALD: It was a pretty enthusiastic crowd–there was however an overflow area behind the stage that didn’t really get filled. Campaign officials say that was just a precautionary measure  in case they needed more room. I’d say a largely enthusiastic crowd but they were not overwhelmed.

RICHARD LIU: She was saying how she was going after the everyday American. But those who are maybe watching the background and who was there in the crowd, they didn’t seem to reflect necessarily the everyday American per se, in terms of looking at diversity and those who were there but, of course, that’s just what we saw on the camera. What did you see there on the ground?