Rachel Maddow of MSNBC is sure that Mitt Romney’s recent campaign ad is “racist.” How does she know? Well, she can’t point to anything substantive that proves it, so she has to feel that it’s racist and since she feels it, it must be so.

The ad under Maddow’s cross-eyed microscope, titled “Right Choice[1],” speaks to Obama’s quiet and quasi illegal gutting of the welfare reform law that was signed into effect by Bill Clinton back in 1996.

In 1996 President Clinton and a bipartisan Congress helped end welfare as we know it by requiring work for welfare. But on July 12, President Obama quietly announced a plan to gut welfare reform by dropping work requirements. Under Obama’s plan, you wouldn’t have to work and wouldn’t have to train for a job. They just send you your welfare check. And welfare to work goes back to being plain old welfare. Mitt Romney will restore the work requirement, because it works.

But to Maddow this is all “racism.” How is an ad that talks about the gutting of a law duly passed by Congress and signed by a Democrat President a “racist” ad? Well, it just, you know, like totally is and stuff.

Here is how, on her August 7 show, Maddow explained… or tried to explain, her racist feelings.

But it is also a blunt allusion to the populist, racist politics of white economic racial resentment. And the Romney campaign has to know it, they’re not dumb. Which means that, frankly, they are so worried about continued discussion of Mitt Romney’s tax returns that they would rather change the subject to just exactly how overtly racist their new ad campaign is instead. That means they’re worried.

What is most amusing about Mz Maddow’s point, here, is that Obama’s attempt to get the nation to worry about Mitt Romney’s tax return is itself the change of subject. Obama is desperate to talk about anything other than what he is doing in office. Is Romney’s tax return relevant to the campaign? Not really. Is Obama’s gutting of a sixteen-year-old entitlement reform law relevant to the campaign? You bet it is. But, hey, let’s not talk about relevant things, shall we?

But let’s discuss this “obvious” racism that Maddow can see in her crystal ball. She says it is an ad filled with innuendo and this sly, unstated racism and that this makes it “obvious” racism. So, something that is “obvious, dog-whistle racism,” as she called the ad later in the show, has to push its racism by innuendo? If you have to read code words and innuendo into something to find racism, is it really that “obvious”?

This is the left’s favorite tactic, saying that “code words” and innuendo and guesswork amount to “obvious” racism. When you get right down to it, the left claims that any questioning of an African American is a “racist” attack. For a perfect example of this sort of anti-intellectual base assumption, a pair of “professors” recently put out a report[2] on how to see racism in every ad Romney has ever put out. These two pointy-headed profs see racism in everything Romney says about Obama, everything he does in his campaign.

It must be awfully easy to be a liberal. One need not actually pay attention to facts. One need not actually use his brain to think about what someone is saying. All one need do is throw that messy “thinking” business out the window and assume that everything is “racism.” It is simply replacing thoughtful consideration with emotion and kneejerk reactions in a process that takes any intellectual exercise right out of the mix. This base assumption makes thinking unnecessary and Maddow proved this maxim quite well on her show.

Again, it cannot be stressed enough that this bill was one signed into law by Bill Clinton. Remember him? The one African American liberals said was “the first black president[3]“? Here is a photo of when he signed that bill. 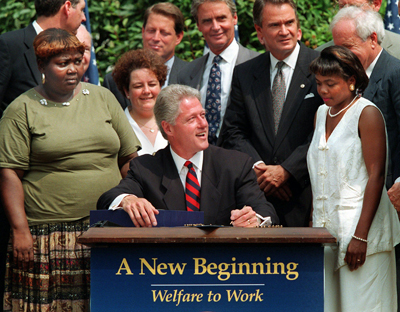 I suppose the African American women standing on either side of President Clinton, the “first black president,” were “obvious” racists, too?