I am ALL for religious freedom but I’m really confused when organizations forget who their customers are and decide to use their platform to prove they are politically correct… especially when the customers aren’t demanding it. Fort Worth Stock Show & Rodeo make a really bad judgment call when they decided to have a Muslim Imam say the opening prayer on a Sunday [1]for their all-cowboy, all-American event— *hint the crowd were mostly Christian and military families. I also don’t believe they’ve invited a Jew or an atheist to pray over the stock show and rodeo. 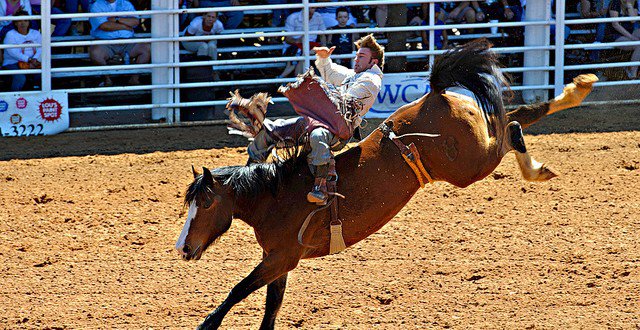 The annual Fort Worth Stock Show and Rodeo doesn’t usually attract controversy. Since 1896, Ft. Worth has the held the longest, continuously running livestock show. So it is noteworthy that the historic event, full of country-style family fun, brought on heated vitriol this year.

Rodeo fans awoke to news that a Muslim Imam had offered a blessing before the festivities started. Moujahed Bakhach of the Islamic Association of Tarrant County delivered opening remarks. Not much later, outraged fans took to the event’s Facebook page to voice their displeasure. Comments on posts included these kinds of sentiments:

There isn’t a transcript of Bakhach’s blessing but Brad Barnes, president and general manager of the Stock Show, said Bakhach’s blessing was “spot-on” and “very appropriate.” Even with the support from rodeo officials, however, the social media firestorm would not abate. Bakhach had to cancel a planned second blessing to be delivered on February 2nd. Folks on Twitter echo negative reactions to a Muslim being asked to lead a blessing at the rodeo:

@fwssr[4] I will no longer be attending your rodeo. To have a muslim lead prayer is a insult to America. Islam hates America.

A muslim prayer at the Fort Worth Stock Show & Rodeo? There goes Rodeo in Ft. Worth. Pathetic PC idiots @BradBarnes11[6] #fwssr[7] #BoycottFWSSR[8]

It should be noted, that the remarks were not a Muslim prayer but an all-purpose blessing that happened to be delivered by a Muslim. The Fort Worth Stock Show and Rodeo runs a little over three weeks every year. The 2015 event will continue until mid February.

ATTENTION to future event organizers!
Rule #1- Know your audience! This is a guide of suggested places where an opening prayer by a Muslim Imam would not be a good idea:

Any other event where the entire crowd is non-Muslim or where terrorists in the name of Islam have terrorized. Common sense is so hard to come by that it is my pleasure to create this list for you. It is also notable that a Jew or Christian should also NOT be invited to give the opening prayer for an ALL Muslim event… it doesn’t make sense of any kind. Rule of thumb in knowing your audience; it is appropriate if a decent percentage of the people in attendance share the belief of the person leading the prayer for the event. You’re welcome.