Muslim Man Walks On Stage At GOP Convention – LIBERALS Left SPEECHLESS By What Happened Next! [VIDEO]

Muslims hate Donald Trump, right? It’s true that many do. However, there are many who are sick and tired of bad apples perverting their religion to kill in the name of Allah and many of these people see Trump as seeking to do something about it. One such man, Sajid Tarar, has embraced Trump and even offered the closing prayer at the Republican National Convention.[1] 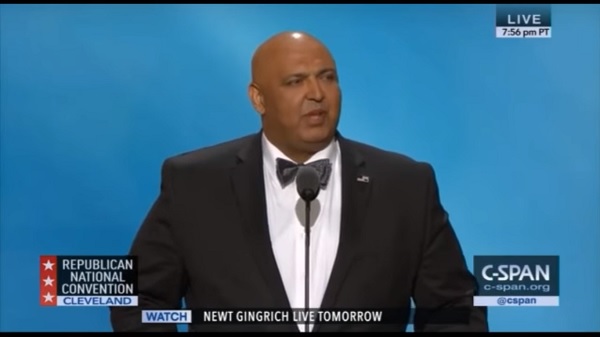 Sajid Tarar is the founder of American Muslims for Trump.

The second day of the Republican convention in Cleveland closed with a Muslim leading the delegates in prayer and expressing support for GOP presidential candidate Donald Trump.

Sajid Tarar, founder of the group American Muslims for Trump, used the word “God” rather than “Allah” through his minute or so long prayer Tuesday night, which he followed with brief remarks.

“Let us pray … for a safe America,” said Tarar, a Pakistani immigrant who lives in Baltimore, adding, “And let’s ask God to make us strong to fight terrorism all over the world. … Let’s pray to get our country back.”

Most of the delegates on hand appeared to receive his presence well, with applause heard as he entered the stage. Nearly all the delegates could be seen bowing their heads as Tarar prayed.

According to The Hill[4], one delegate began shouting him down, saying, “This is an abomination,” but others told him to be quiet.

“The Prophet Muhammad, peace be upon him, said that we all have a piece of flesh in our bodies. If it is good, then the whole is good; if it is not, then the whole body is spoiled,” he continued. Perhaps an undercurrent could be picked up in the Quicken Loans Arena with the mention of Muhammad.

Tarar is one of the good guys.

It’s awesome to see that he hasn’t given in to the liberal media hysteria surrounding Trump and Muslims.

There are many, many Muslims in the world that manage to practice their faith in peace.

However, if it seems like too often Muslims – violent and peaceful – are lumped together, that’s because too few in Muslim communities work to weed-out those who give Islam a bad name.

Peaceful Muslims in America are tired of being profiled; that makes sense. However, we are tired of fearing for our lives and tired of violence that routinely occurs home and abroad in the name of Allah.

So, if the peaceful Muslims of the world wish to stop being eyed suspiciously, they must view working with non-Muslims to stop bloodshed as a righteous duty.

Tarar gets it; we need more Muslims to stand-up for their faith and help denounce those who kill in the name of Allah.