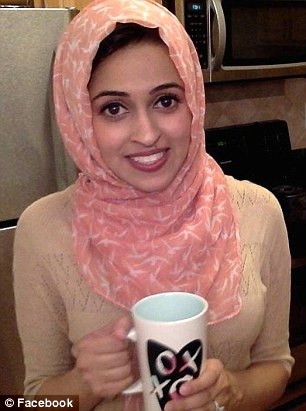 Trump won the Presidential election. And there are some people who appear to be using that as an excuse for engaging in behaviors[2] Trump would find reprehensible. These people are not representative of Donald Trump’s views, they represent only themselves and their hate filled perspectives.

A young Muslim high school teacher in Dacula, Georgia, found a nasty note in her classroom. The note, which was addressed to ‘Mrs. Teli’ advised that her headscarf was no longer welcome and that she should hang herself with it. This kind of behavior is unacceptable. Trump is NOT about being hateful. He is about making this nation great again for EVERYONE. So whoever these despicable people are, they don’t represent Trump or Trump’s voters. They represent only themselves.

The note says nothing about Trump. But that didn’t stop Mairah Teli from inaccurately pinning the blame on Trump’s election. There’s no way to know whether this hatred was fueled by the election since the writer said nothing about it. And it does not help the situation to jump to conclusions. 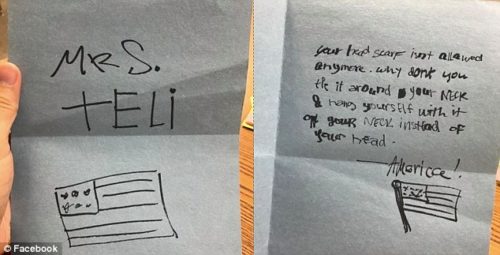 Hopefully these hatemongers will be found. There is no excuse for this kind of intimidation. But let’s not blame Trump or his election if it hasn’t even been mentioned in the perpetrator’s note. Let’s blame the writer of the note. Mrs. Teli should not have to be victimized by this, but she should also not blame a guy who had nothing to do with it.

Anyone using the election to hurt or threaten others is wrong. Period. But let’s be sure we are blaming the criminals and not the candidates.

See Trump explain his plan for ALL Americans including Mrs. Teli and her family, below.