As Obama continues to flood America with Muslim “refugees,” employers with Muslim workers find themselves under increasing demands to adhere to Sharia Law. And if they refuse, they could count on bad publicity or a fat lawsuit from CAIR, sometimes with the Obama DOJ joining in – just for fun[1]: 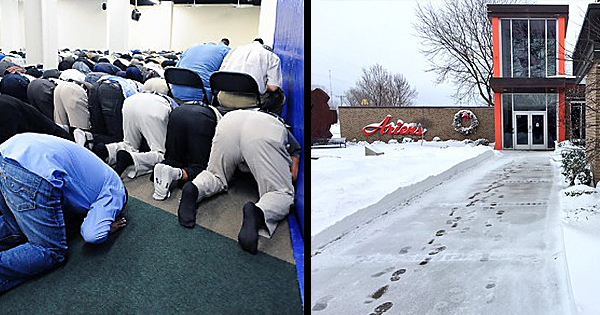 [2]But now these employers are fighting back.

Last month we reported on how meat processor Cargill fired 150 Muslim workers who walked off the job in a Colorado plant when their prayer demands were not met.

Today, comes the report of a confrontation between dozens of Somali-Muslim workers in a snowblower plant in Green Bay, WI:

Despite objections from management, several times daily, they would all leave their positions on the assembly line to roll out their rugs and pray to Allah. Apparently, the company was tired of lost production from the interruptions, which can last well over ten minutes by the time they walk away, pray, then actually make it back to the line, so the company did something about it.

According to WBAY, when the Muslim workers left their post to pray, their supervisor handed them an unemployment form and said that they’re more than welcome to pray whenever they want, but they won’t be doing so while employed by Ariens. A new company policy states that prayer breaks can only be taken during the scheduled breaks that all employees get, which means no more special exception for the Muslims.

Apparently the company had previously been intimidated into complying with the demands of the Muslims, but their lawyers assured them they were on firm legal ground.

Under law, the Equal Opportunity Employment Commission states that “an employer does not have to accommodate an employee’s religious beliefs or practices if doing so would cause undue hardship to the employer… [such as] decreased efficiency.”

So the company acted and told the Somalis: comply, or take a hike. Ariens management reports that a majority of the Muslim employees have quit as a result.

Good for them! Maybe now more employers will follow suit. Find a job that will allow your prayers to be said, and quit trying to make special exceptions for yourself.