In the U.S., we have the freedom of expression. In fact, this freedom is what separates us from much of the world. Those who would stomp, shred or burn our American flag should be allowed to do so by government, but they should not be at all surprised if they are stopped by those who take offense. In a video posted on the Blaze[1], one U.S. Marine shares his perspective on those who desecrate the flag he and so many other have fought to defend. 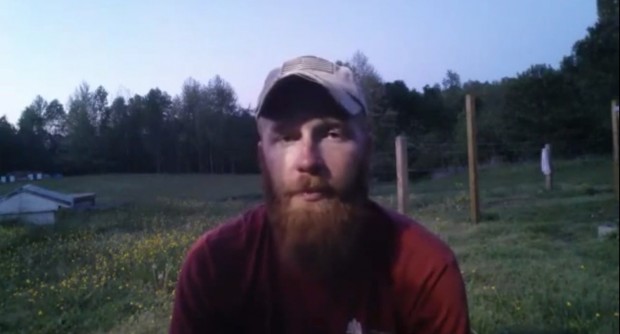 A new Internet trend that involves people stomping on the American flag[3] has caught the attention of U.S. Marine veteran Shane Lawler. He seems to be the kind of guy these flag-stompers wouldn’t want to run into during their acts of “protest.”

The trend began after a Georgia man, Eric Sheppard, posted a video of himself stomping on the U.S. flag in protest of racism. Others online soon did the same and the stunt became known as the #EricSheppardChallenge on Twitter.

Lawler is not a fan of the “challenge.”

The Marine vet recently posted a calm yet excoriating video message on Facebook addressing individuals who don’t seem to like the United States very much.

“What we have is a group of people who are challenging other groups of people to stand on the American flag, and desecrate it, dance on it, jump up and down on it, all kinds of silly things,” he said calmly.

Lawler then reminded the protesters that “at some point in history, my ancestors, your ancestors, everybody’s ancestors fought in some way, shape or form to be a part of this country and reside in the nation over which that flag flies.”

“If you don’t like what America has to offer, pack your s**t and get the f**k out,” he added. “There might be another country on this planet that is capable of dealing with your bulls**t, but that’s not me.”

Watch the Marine’s full video message, which had been viewed nearly 10 million times as of Tuesday night, below (Warning: Some strong language):

While liberals seek to ban that which they simply don’t like, conservatives understand that people have a right to desecrate the very symbol of freedom that allows them the right to stomp upon the flag.

However, they should expect any level of support from those who understand what makes America so great. Further, Lawler is correct; if they find America so intolerable, they should feel obliged to get the hell out.