Most days in traffic are rather uneventful. Occasionally, there is a wreck up ahead or a motorcyclist zipping-through, but for the most part, it’s just moving slowly to get from A to B. However, motorists in rush hour in Russia spied an odd sight recently: a naked woman walking up and down traffic for no readily-apparent reason.[1] Many are wondering why nobody offered to help her, but there may be a reason for that… 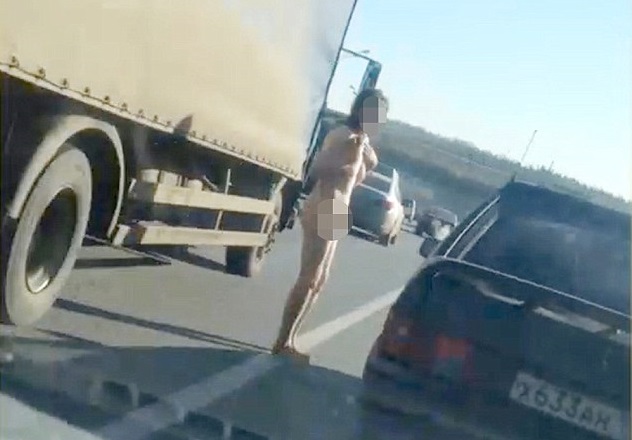 This is the moment a naked woman was filmed as she walked between traffic on a main road during rush hour.

The bizarre sight was captured on the ring-road circling the city of Moscow in western Russia.[3]

In the 30 second clip, the woman can be seen looking distressed as she walks between two lanes of slow-moving traffic which continues to drive past her.

Witnesses described how the young woman looked ‘anxious’ and was shivering from the cold weather.

The images shared by one of the passengers in a passing car show her walking in the middle of the road and trying to cover her breasts with her hands.

However nobody stopped to help, instead choosing to video her on their phones as they passed.

According to local reports, one of the motorists called police and an ambulance finally arrived and took her to hospital.

The footage has been shared widely since being uploaded and has prompted comments from social media users lamenting the lack of compassion shown towards the naked woman.

One user, Lyudmila, wrote: ‘All these drivers probably had blankets in their cars, but none of them offered her clothes or at least a scarf.’

Another user, Ruslan, admitted he did not try and help as he feared the woman ‘was on drugs’

Perhaps nobody helped this woman because this world is outrageously over-reactive to misunderstandings.

Think about being a male and trying to help this woman. Clearly, it seems possible that she might be severely unstable. So approaching her might not only prompt violence on her part, but might also prompt screams and/or screams of “help!”

When the police arrive, would you want to be next to the naked woman on the freeway screaming for help as you look panicked and worried?

It’s a shame, but we live in a world where good Samaritans often incur a risk. Try to help a lost little girl in a mall find her mom, you can be eyed as a pedophile. Approach a naked woman on the freeway, and your intentions very well may be called into question. Try and offer her refuge in your car to drive her to a hospital and to a well-intentioned good Samaritan warrior, you may be trying to abduct the emotionally-disturbed naked woman. Soon, you’re explaining to police that you weren’t trying to “kidnap” anybody, but just trying to help.

It seems far-fetched, but we live in a world where public urination can land someone on the sex offender registry (granted, that’s the U.S. and only in some states).

I’m not saying our societal lack of action is right,  but it’s just understandable.