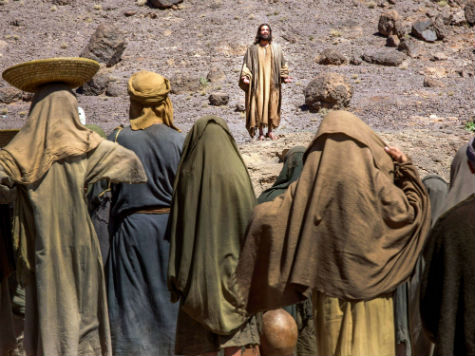 Born in the United Arab Emirates but raised in Lebanon, Sleiman moved to the U.S. when he was 21 and currently lives in Los Angeles. He’s best known for playing a Syrian immigrant in the 2008 indie film The Visitor. He’s also appeared in Showtime’s Nurse Jackie (as a gay Muslim nurse); NBC’s ER (as an American soldier); and Fox’s 24 (as a terrorist suspect in 2007).

Sleiman is not particularly outspoken about his faith, but on his Facebook page, he’s shared Christmas greetings the last couple of years.

On December 25, 2012, he wrote “A Muslim and a Jew celebrating Christmas, that’s what happened last night when I spent Xmas eve with a very good friend. Merry Christmas! Giving you lots of love and wishing you tremendous happiness today and everyday of your lives.”

Then, last Christmas Day, he posted, “Christians, Jews, Muslims, spiritual, buddhists, atheists or an other believers or non believers: Merry Christmas to you all! ‘Love our neighbor as ourselves.’ Jesus Christ. He said it best.”

“The film Killing Jesus will break new ground in chronicling the life of the most famous human being who ever lived. The superb cast and script reflect much thought and research,” O’Reilly said, according to a press release. “Viewers are in for something very different and very special.”

But if Killing Jesus, which is being shot in Morocco, far from Richmond, Virginia, location for the first two movies, follows the pattern of its predecessors, the script by veteran writer Walon Green will chart its own course, using O’Reilly and Dugard’s book less as a roadmap than as a jumping-off point. Killing Jesus is expected to premiere globally on National Geographic Channel in 2015, airing in 171 countries and 45 languages, including in Spanish on NatGeo Mundo.

Obviously this actor has a high regard even a belief in Jesus of Nazareth. I would not be surprised that after really trying to capture the essence of Jesus, this man converts to Christianity… isn’t emulating Jesus what Christians are suppose to do?