Navy’s New Weapon Could Be Used On A New Stealth Warship: A Super-Powerful Rail Gun!

Since around the time of the Civil War, the basic principles behind ammunition have changed little. A cartridge with a primer is filled with gun power and a bullet is seated on top. This principle applies to shells and other large ordinance as well. Now, that looks like it may be about to change as the military is designing a new “super weapon” that could be a game changer: a high-powered rail gun. 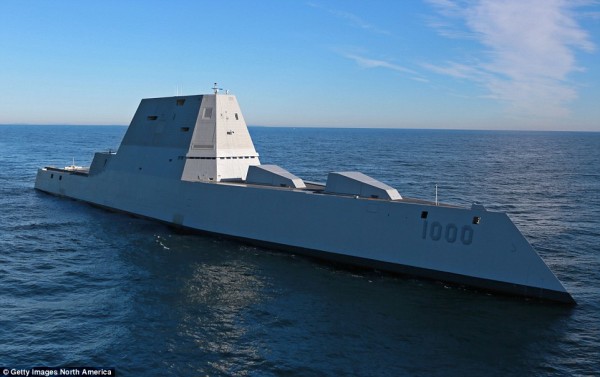 A radical new weapon that can fire a shell at seven times the speed of sound could be used by the Navy as soon as 2018.

Described as ‘Star Wars technology’ by researchers, the rail gun can fire a shell weighing 10kg at up to 5,400mph over 100 miles. It does this with such force and accuracy it penetrates three concrete walls or six half-inch thick steel plates.

Development of a futuristic weapon is going well enough that a Navy admiral wants to skip an at-sea prototype in favor of installing an operational unit aboard one of its new Zumwalt-class destroyers.

Electromagnetic launchers were one of the areas researched by Ronald Reagan’s Strategic Defence Initiative, nicknamed ‘Star Wars’ after the science fiction film franchise.

Rail guns use electricity instead of gunpowder to accelerate a projectile at six or seven times the speed of sound — creating enough kinetic energy to destroy targets.

It’s technology that holds the possibility of providing an effective weapon at pennies on the dollars compared to smart bombs and missiles.

Admiral Pete Fanta, the Navy’s director of surface warfare, has floated the idea of foregoing the current plan to put a prototype on another vessel this year and instead put it directly on future USS Lyndon B. Johnson – though no final decision has been made.

‘The Zumwalt-class is one of a number of options being explored for the electromagnetic railgun,’ said Lt. Cmdr. Hayley Sims, a Navy spokeswoman.

‘Due to the size, weight and power requirements, some platforms will be better suited for the technology than others.’

Using an electromagnetic force known as the Lorenz Force, the gun accelerates a projectile between two rails that conduct electricity, before launching it at ferocious speed.

This means the railgun can fire further than conventional guns and maintain enough kinetic energy to inflict tremendous damage.

Railguns were first conceived of nearly a century ago and patented by French inventor Louis Octave Fauchon-Villeplee.

Nazi Germany took up the research during the Second World War to adapt its anti-aircraft guns.

There has been talk since the inception of the Zumwalt program that the massive destroyers would be a likely candidate for the weapon because of its power plant.

The USS Johnson will be the third and final destroyer in the Zumwalt class.

The 600-foot-long warship uses marine turbines similar to those that propel the Boeing 777 to help produce up to 78 megawatts of electricity for use in propulsion, weapons and sensors. That’s more than enough power for the railgun.

If it’s placed on the warship, the system could replace one of the forward turrets housing a 155mm gun that fires rocket-propelled projectiles.

For now, however, the official plan remains for the railgun prototype to be tested aboard a joint high speed vessel this year.

But there are concerns that the plan may be pushed back into 2017, and Fanta suggested skipping it altogether.

The railgun, along with laser weaponry, are two futuristic technologies that Fanta said have evolved from being a matter of scientific research to one of practical engineering.

The Navy is interested in those weapons — along with smart munitions that can improve existing naval guns — because of their low cost as well as lethality.

‘The Navy is determined to increase the offensive punch of the surface warships,’ said Loren Thompson, a defense analyst at the Lexington Institute.

‘To do that with a limited budget, it needs to look at everything from smart munitions to railguns to lasers.’

The railgun discussion isn’t widely known inside the shipyard, where the Zumwalt-calls destroyers are being built.

Bath Iron Works, a subsidiary of General Dynamics, had no comment.

Shipbuilder Charles Davis said there was talk of a railgun when the yard began work on the first ship in the class, but he said there’s been no discussion since then.

‘They’ve been pretty tight-lipped about it,’ he said.

I was never great at science. I usually stuck to history, politics or literature. However, when it came to guns, the physics always intrigued me. This new rail gun is a fascinating concept and one that could be a game changer as the dangers of the world amass on America’s doorsteps.