Okay, I have to admit that last night I ONLY watched the debate to see Hillary have a seizure, collapse at the podium or go into a weird coughing fit like she does. None of those things happened. As a matter of fact everything about her look was flawless… makeup, wrinkles (where did they go my mom asked), new highlights, perfectly coiffed hair. I wondered how after months of strange episodes of coughing fits, falling, unable to walk up stairs without help, shuddering that looks like mini-seizures; how she was able to stand up for the entire debate without assistance. The first half of the debate, her eyelids looked heavy, but that went away about halfway through when whatever they gave her kicked in.

My friend Nancee Jones said that she “was disappointed in Trump tonight but? he was going up against a Politician (which he is not) and a CONGENITAL LIAR. I don’t know if she specifically LIED tonight (maybe about him supporting the Iraq war??) but she is also a sociopath. There are two more debates and I DO PRAY he comes in better prepared and can get some zingers in there on those.” I agree, I was excited to watch Trump the first half, but then whatever Hillary took (conjecture) kicked in, she was like a general on a warpath. She didn’t care that her red suit already made her look aggressive, she allowed the claws to come out. She did an excellent job baiting Trump and the poor untrained debater, Trump, took that bait every time.

Despite everyone agreeing that Hillary got the better of Trump, even the Liberal panel from PBS News Hour looked downtrodden, even dejected over her performance. Yes, Hillary won, but they complained that Hillary didn’t put out anything substantive. They didn’t feel the ‘leg tingle’ so to speak about her performance. They didn’t even look very enthusiastic that she had just wiped the floor with Trump’s expensive blond hair (that is NOT a hairpiece, I’ve seen it in person).

Even Liberal CNN’s[1] David Gergen said that Hillary didn’t do ENOUGH. Headline for his recent post states that: ‘Clinton crushed Trump, but was that enough?’ Coming into the presidential debate, I thought that if Hillary Clinton won decisively, she would virtually lock up the election. Coming out, it was clear that she did win decisively, but I suspect that the campaign will remain ferociously close. For one thing, Trump supporters aren’t judging him by traditional standards. They have heard establishment politicians over-promise and under-deliver for so long that they crave something different. They were quick last night to see yet more signs of media bias. Trump was an angry figure, yes, but he is also giving voice to their anger.

Equally to the point, Mrs. Clinton seemingly struggled in the debate to create closer emotional bonds with voters. She has been vexed with the issue of likability throughout this campaign and in recent months her team has become concerned about her ability to mobilize millennials in the way that Barack Obama did so successfully.

While Hillary ‘won’ because her ‘arguing was good’, she lost because even her own people don’t feel a ‘connection’ to her. Of course they wouldn’t, she’s a monster. Someone else was happy that Hillary turned up such a turd at the debate and he doesn’t get to vote for either candidate. My favorite fact about the debacle last night called a debate is that there are whole stories on what ‘Putin’ thought of the debate… because we really care. In reality, we don’t, we’re still ‘Merica but it’s funny to see how interested the world still is in the United States. Russia’s state-run media practically announced that: Trump Won[2] Putin’s Focus Group and judging from Russia’s state-sponsored Twitter coverage of the presidential debate, the Kremlin is anything but a swing state. 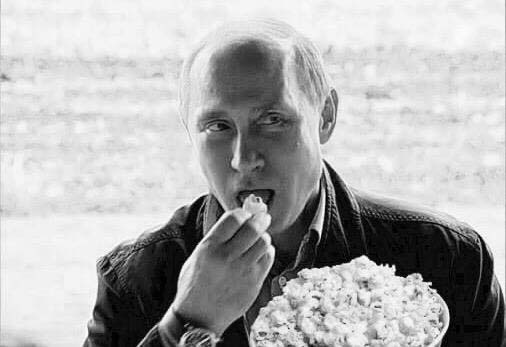 Gennifer Flowers: The first scandal of the debate erupted over the weekend as the candidates traded tweets over who they would invite to watch the debate live in New York. Hillary first announced plans to invite Mark Cuban, who has been critical of Trump, to which Trump responded with a threat to invite former Bill Clinton mistress Gennifer Flowers.

Trump’s quips are amazingly similar to the way I would respond to other’s nastiness. I really loved his twitter response:

If dopey Mark Cuban of failed Benefactor fame wants to sit in the front row, perhaps I will put Gennifer Flowers right alongside of him!

Hi Donald. You know I'm in your corner and will definitely be at the debate!…

Podium-gate: The next point of contention proves that “size does matter”, at least to Hillary Clinton. Last week, Hillary’s team demanded a step stool for their candidate so that the 5’4″ Hillary wouldn’t look small and frail beside the larger 6’2″ Trump. While the debate commission denied the step stool they did allow a “custom-made” podium which was presumably scaled down by exactly 14% to match Hillary’s relative stature…this is the status of American politics folks. Here’s a look at the podiums to be used last night: 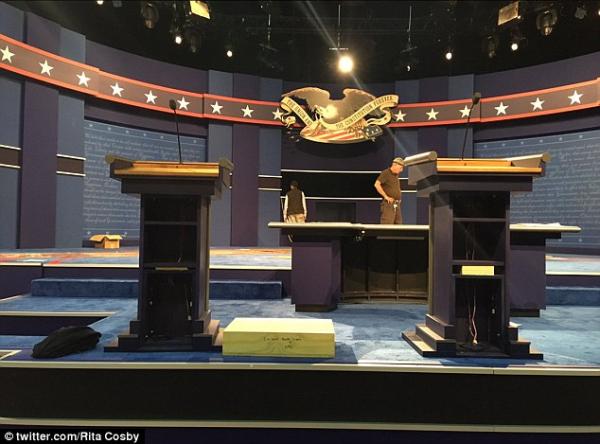 Ear Mics: The next scandal arose out of the last Commander in Chief forum hosted by Matt Lauer in which Hillary was accused of wearing an ear piece so as to receive guidance from advisers during the discussion. According to the World Tribune, the issue prompted one Maryland voter to write a letter to the Federal Elections Commissioner, Matthew Petersen, seeking assurances that ear pieces would not be allowed though no such assurances were provided. That said, Carlos Greer, of the Commission on Presidential Debates, sent out a message to news organizations on Sept. 9 banning devices that would allow presidential debate moderators get directions from their news teams. 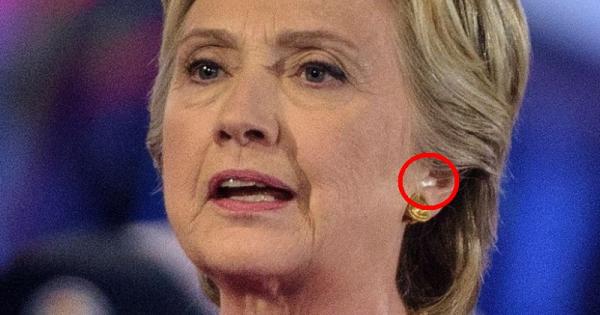