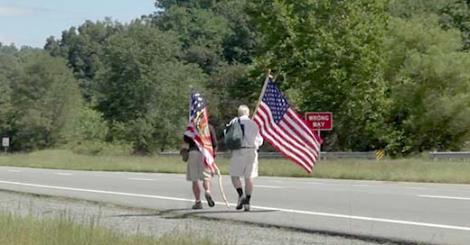 [1]Marine  Sergeant Andrew Tahmooressi, who served two tours in Afghanistan with valor, has been stuck in Mexican prison for months, due to mistakenly driving over the border with three loaded guns in his vehicle.  The story has garnered national attention, but the Obama administration will not lift a finger to negotiate with the Mexican government. Meanwhile, Tahmooressi is languishing, suffering from PTSD in solitary confinement. Lance Cpl. Terry Sharpe and Allen Brown, two elderly Marine Corps veterans, are so incensed that they are walking from North Caroline to Washington, D.C., to demand that Obama help their fellow Marine. Sadly, their efforts are getting little coverage from the mainstream media, no doubt because the media is covering for Obama’s inaction. [2]

An article at Newsbusters contrasts the lack of coverage with this:

Back in January 2010, The New York Times offered an over 700-word puff piece on four illegal aliens setting out on New Year’s Day to walk from Miami to Washington D.C. to demand amnesty and subsequent legal status for all illegal immigrants.

It is no secret that most of the U.S. military does not like Obama. A former Navy SEAL estimated[3] last week that over 90 percent of the military disapproves of Obama.  Obama knows this, and it may be why he refuses to take any action to help this brave veteran – he’s sticking it to the military.