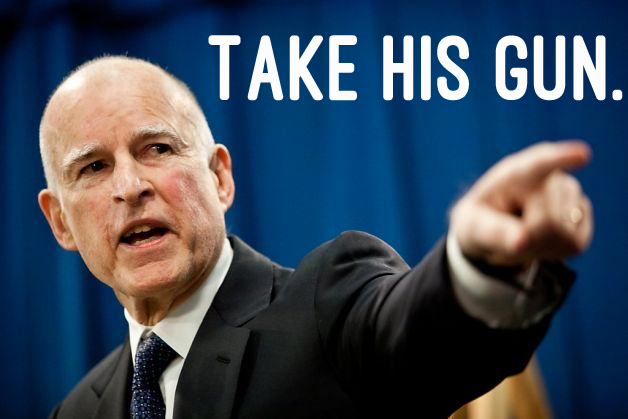 A new California law signed by Governor Jerry “Moonbeam” Brown would allow a panel of bureaucrats to order the confiscation of a private citizens legally owned firearms, because freedom is so last millennium[2]:

The new legislation allows police officers or family members to ask the courts for restraining orders which would facilitate the government confiscation of firearms from law-abiding citizens. Within 21 days, a hearing must be held to see if the citizens can regain their legally-owned firearms and their Second Amendment right that is supposed to be uninfringeable.

See how that works?

You get to apply to have your rights reinstated by the government AFTER they take them. Without due process, of course.

“If it can save one life, one family from that agony, it will be worth it,” Democratic state Senator Hannah-Beth Jackson, said during debate on the measure.

You know what kills more kids than guns?

left-wing Slate magazine noted[5] just after the crime at Sandy Hook Elementary in 2012 that 297 kids had been killed in school shooting between 1980 and 2012.

Again, it is horrid that even one child should be killed at school, but let’s look at just a few other statistics to which to compare that three decades of school shootings.

When is California going to outlaw these child killers?