America’s fighting forces are comprised of more than just men and women; many animals dutifully work to save lives and a new movie that is sure to be a tearjerker tells the story of such an animal and his handler.[1] 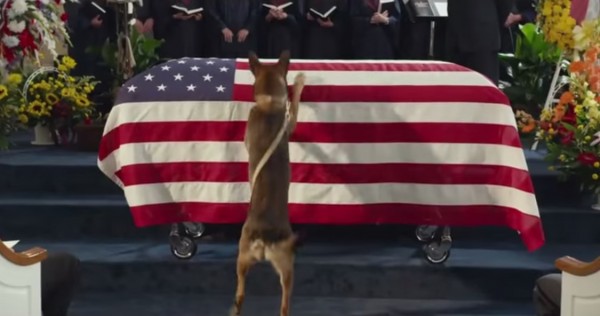 The film tells the story of Max, a military working dog, who loses his handler during combat in Afghanistan.

When he is returned home and adopted by his handler’s family, he suffers from severe Post Traumatic Stress Disorder.

The path towards healing — for everyone involved — is rocky, but ultimately it is these struggles that bring a broken family back together.

Here are five important takeaways from the movie:

But the American Humane Association[3] is working with Congress to get the language of the U.S. National Defense Authorization Act changed[4] so that all four-legged heroes can return home and be safely reunited with their handlers— or their handler’s family as was the case in “Max.”

“It is our moral imperative to bring these dogs back to U.S. soil,” War dog advocate and American Humane Association President Robin R. Ganzert, Ph.D. said in an exclusive interview with Liftbump.

Ganzert hopes that this movie raises awareness about these issues.

As for director Boaz Yakin, he hopes the film challenges and provokes emotion. At a special screening of the film, he explained:

“We set out to make a family movie, a family movie in the true sense of the word— to make a movie… that kids can be challenged and provoked by, and be asked to step up in there emotional response. A movie that adults can actually relate to and connect in a real way. So hopefully we have achieved that.”

And in addition to spreading these important messages, the film will have you grabbing for the tissues within the first five minutes. Even more, it will make you want to go home and hug your family, hug your dog.

“Max” is truly a testament to the incredible bond that exists between dogs and their humans, and in particular the bond between a military dog and his soldier.

The movie looks like it could really shine a light on these animals who risk everything for their owners while, simultaneously, entertaining. With America’s conversations centering on a variety of absurdities, perhaps we can carve out a few moments to discuss the plight of dogs who risk their lives for this country.