ICYMI: Melissa Click is back, y’all, in all her profane glory – this time, via police body cam footage. Boy, is THIS ever a doozy:[1] 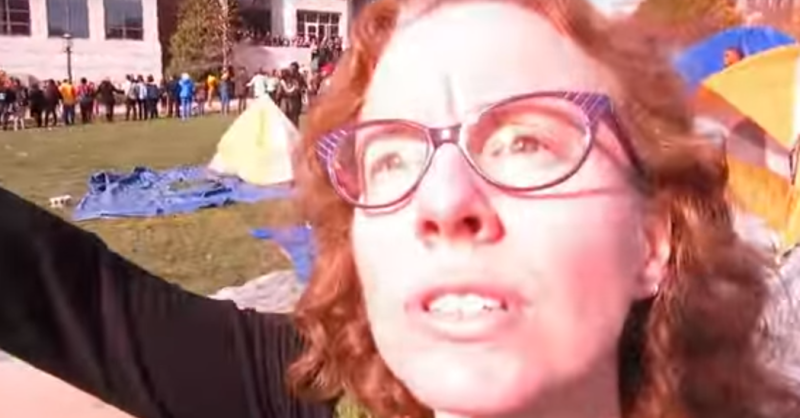 Disgraced Missouri media professor Melissa Click has been caught on camera yelling profanities at officers during the Mizzou protests.

The University of Missouri assistant professor was suspended last month after she pleaded guilty to ‘siccing’ muscle on two reporters covering an anti-racism protest in November.

Now police body camera footage has emerged of Click, 45, shouting and swearing at officers during an earlier protest.

‘Her conduct and behavior are appalling, and I am not only disappointed, I am angry, that a member of our faculty acted this way,’ interim chancellor at the University of Missouri’s Columbia campus Hank Foley told the Missourian.

‘Her actions caught on camera last October, are just another example of a pattern of misconduct by Dr. Click—most notably, her assault on one of our students while seeking ‘muscle’ during a highly volatile situation on Carnahan Quadrangle in November.’

The shocking new footage shows Click at a protest on October 10 when black Missouri students blocked homecoming parade and were shoved away – which led to eventual resignation of former university president Tim Wolfe.

Students halted the parade to protest right in front of Wolfe’s convertible, complaining about the college’s failure to address an alleged catalog of racist incidents including the smearing of a swastika in human feces on a wall.

Seriously, who acts like this? Grow up lady, and get some class.