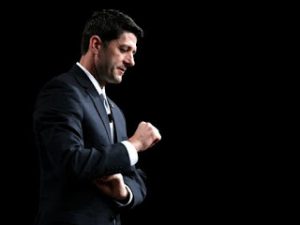 [1]Here’s a lesson the GOP establishment needs to learn. Stop going through the corrupt media machine aka the mainstream media as the only way to communicate to voters. The new media or the alternative media or conservative media in which this blog plays a small part is where millions of Americans rely on to get their news and get informed. The GOP establishment still hasn’t learned that lesson.

The New York Times reports on the role of conservative media representing the grassroots–and how these “far-right” sites and talk radio hosts have prevented a simple coronation for Rep. Paul Ryan (R-WI), the establishment choice for Speaker of the House.

Far-right media figures, relatively small in number but potent in their influence, have embarked on a furious Internet expedition to cover Representative Paul D. Ryan in political silt.

The influence of conservative websites has enraged members who were once considered right of center themselves, and who are desperately trying to keep Mr. Ryan from getting spooked.

“Anyone who attacks Paul Ryan as being insufficiently conservative is either woefully misinformed or maliciously destructive,” said Representative Rep. Tom Cole (R-OK), Republican of Oklahoma. “Paul Ryan has played a major role in advancing the conservative cause and creating the Republican House majority. His critics are not true conservatives. They are radical populists who neither understand nor accept the institutions, procedures and traditions that are the basis of constitutional governance.”