Dummy. It’s a commencement speech and this News Anchor uses it to attack Trump. Come on lady…BAD FORM! She had an opportunity to fill the minds of these graduates with hope and excitement for the future, and instead she takes a MAJOR metaphoric DUMP on them…bringing in negativity to attack a Presidential candidate. The response though, she didn’t see coming…and her attempt at making a statement – BACKFIRED![1] 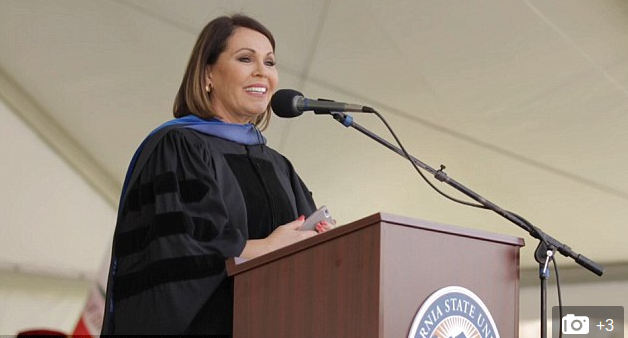 According to The Washington Post, Salinas felt the speech was well-received and said people thanked her afterwards for addressing their parents in their native language.

However, when the 62-year-old spoke to the College of Communications later in the morning at a separate ceremony, the crowd booed her.

In her second speech, Salinas said: ‘… they blame us so much for so many things, that now they’re even blaming us, the media, for creating Donald Trump. Imagine that.’

At this point, yells and boos from the audience can be heard in the video as soon as she named Trump.

‘Isn’t that terrible? But we didn’t, right? Who did it?’ Salinas asked rhetorically. ‘I don’t know. Who did it? But they’re to blame.

‘If you allow me to say a few words in Spanish…’

Someone in the audience then can be heard yelling back at her ‘no,’ as others would not quiet down.

A few moments later, Salinas asked the crowd if they would allow her to do something important and another person yelled out ‘no,’ as someone else could be heard yelling ‘get off the stage.’

The Peabody Award-winning journalist then proceeded to turn around to take a selfie to show the crowd of graduates and parents behind her.

The poised anchor didn’t let the crowd’s yells rattle her nerves while speaking, as she appeared to remain calm throughout the awkward moment.

Silly woman…you’re addressing students who have worked hard to graduate and went the right route in becoming a citizen of the United States, whether by their parent’s diligence at keeping the law, or theirs… You basically spit on their accomplishments…by knocking Trump. Bad move…