I long ago stopped watching football. Don’t get me wrong, there’s plenty to like about the sport and I certainly encourage others to watch and follow their favorite teams if they choose. 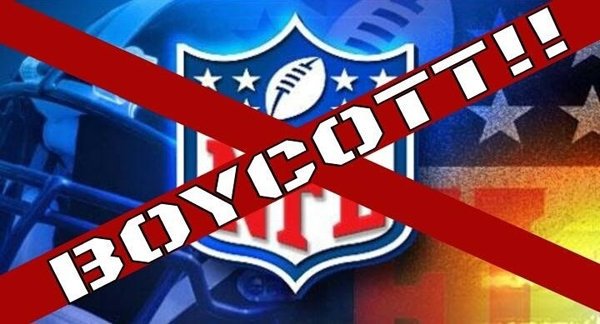 As for me, however, I cannot support an organization that routinely aids in the softening of America. The NFL has embraced reforms designed to punish those that hit hard – a denunciation of the Dick Butkus and Jack Lambert style of true American gridiron.

They have embraced classlessness by allowing each and every showboat to do their special dances after touchdowns and even just modest tackles.

And while the cause represented is a good one, they have even embraced fitting grown men with pink attire – a gesture designed to showcase trendy compassion without having to do anything real to help further a cure for breast cancer.

Now that they have allowed Colin Kaepernick an open door to disrespect America openly, we should expect to see a continuing trend of such outrageousness.

By offering their tacit assent, the NFL has encouraged others to join in on the America-hating trend. On Thursday night, Denver Broncos’ Brandon Marshall joined in to show his disdain for America by taking a knee during the National Anthem.

Several Seattle Seahawks players have already begun disrespecting America in a similar fashion and have even claimed that the team is considering a team-wide effort to disrespect America together during the game on September 11th.[2]

This show of hatred for America comes as these players earn millions upon millions of dollars doing what they love and rising to the heights of their minority-dominated profession… but no, let’s all pretend that it’s virtually impossible for a black man to succeed in this oh-so-bigoted country…

Finally, many fans cannot take it anymore and some are calling for a boycott of the NFL until they start to rein-in the anti-American sentiment.

The hashtag #BoycottNFL has taken off on social media and many are claiming that they intend to boycott the NFL.[3]

To be clear, these morons are free to hate America if they want and they should never, ever suffer government reprisals for their misguided opinions.

However, while some mistakenly cite the First Amendment in defense of these ingrates, the fact is that there is no constitutional right that prohibits companies from setting standards of conduct.

I may use obscenities at home. A company, however, can discipline me for using them in the workplace.

Similarly, these crybabies are at work when they’re on the field. As such, the NFL can (and should) discipline any who disrespect America while on the clock.

If the NFL won’t do the right thing by reining-in these ungrateful children, consumers should not reward them with billions of dollars.

If more losers continue to disrespect our flag I will #boycottNFL[4] I will hold owners and coaches accountable.

[email protected][6] The rich & privileged disrespecting our country & propagating lies.
We pay them to do it.#NFLKickoff[7]#BoycottNFL[8]#NFL[9]@NFL[10]