Liberal hatred for America spreads like a nasty virus. The longer it goes unchecked, the more people take up “the cause” of hating and/or disrespecting America. 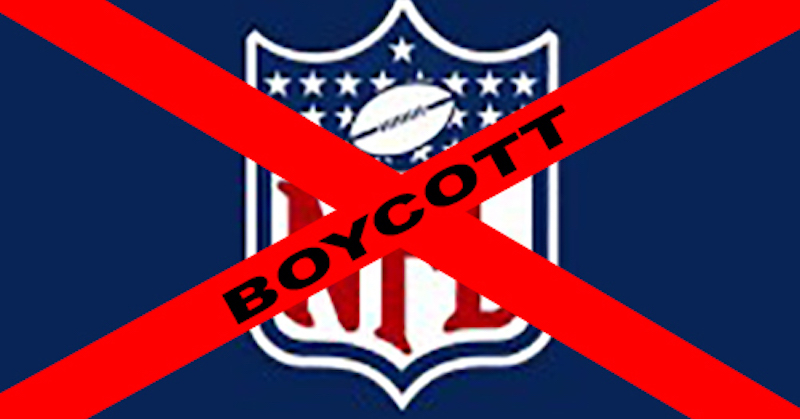 Liberals love nothing more than destroying institutions to promote a silly cause. That’s why when Colin Kaepernick began behaving as an ungrateful moron, conservatives everywhere understood that if the NFL didn’t clamp-down immediately, his anti-American vitriol would spread.

Now, multiple players feel the need to disrespect America in the name of supposed social justice, apparently missing the irony that as these black players fulfill their lifelong dreams while earning millions upon millions of dollars, they assert that America is racist and that it is impossible for people of color to achieve their dreams in this country.

Because people are tired of this brand of nonsense, the red-meat crowd is boycotting the NFL for their tacit complicity in furthering this anti-American message.

Right about now, the NFL is likely panicking because ratings are significantly down. In fact, NBC reports[2] that ratings are down for the first week’s football programming in every conceivable metric.

Monday night’s games also dropped significantly. The first game between the Eagles and the Falcons was 7% lower than last year’s game between the Steelers and the Redskins (which NBC laughably calls “Washington.”)

Perhaps the bigger indicator of the public’s outrage is the second Monday night game. Last year, the Vikings played the 49ers and this year, it was the Rams versus the 49ers – the team on which Colin Kaepernick plays.

This year saw a whopping 25% drop!

We consumers have the power to make our voices heard and I thoroughly encourage ALL Americans to refrain from viewing NFL broadcasts, buying NFL merchandise or supporting the NFL in ANY way until such a time that the NFL makes it abundantly clear that they have seen the error in not nipping this anti-American sentiment in the bud and respond accordingly to these protests now.

There is a brief window for the NFL to regain viewership and fans. However, every day that passes only solidifies the NFL’s tacit complicity in this anti-American hatred and soon, no amount of public apology will afford them the fans that have given up on the pansy-ass league that is increasingly at odds with the beer-swilling, America-loving crowd that constitutes their fan base.