‘No Questions. No Debate. You’re Unionized.’ 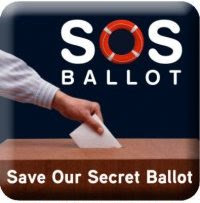 [1]“Labor union bosses are on the verge of passing legislation called the Employee Free Choice Act and denying employees the right to cast their ballot in private in union organizing elections. Rather than holding a monitored workplace election using secret ballots as has been the case for decades, under this proposal the union would automatically be created in businesses with more than ten employees once the union collects ‘authorization cards’ signed by a majority of the employees. No questions. No debate. No secret ballot. You’re unionized[2].”