NO TIP FOR YOU! Hillary stiffs Chipotle crew of tip in tip jar

Here’s a tip:  When you’re running for President, it probably isn’t the best idea to stiff the tip jar at Chipotle.  Hillary was spending time mixing and mingling among her potential voters, but then failed to tip them as she bought herself lunch. [1] 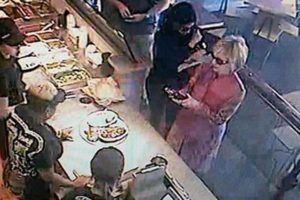 “Hillary Clinton, on her infamous Blackberry, somewhere between New York City and Iowa this week.

Hillary must still be struggling to pay her mortgages, or perhaps her mega-carbon footprint deluxe limo “van” needs to conserve gas money, because she failed to tip at Chipotle!

At a way to fight for the little guy!

Her “spontaneus” moment of ordinary American behavior cost her campaign just over $20. She paid with $21 and kept the change.

With cheapos like Hillary, maybe they do need to raise the minimum wage to $15.

Hillary is continuing her “Mystery Van” Tour across the eastern portion of the county, stirring up voters for her Presidential campaign.  An MSNBC poll[2] this week shows she’s got a long way to go!