Many parents in America entrust their children to the care of others. Teachers, babysitters and bus drivers are all entrusted with this responsibility. However, one bus driver shows that that trust can be misplaced after he discovered that he had accidentally closed the bus’ door on the arm of a little girl and then dragged her for a mile.[1] 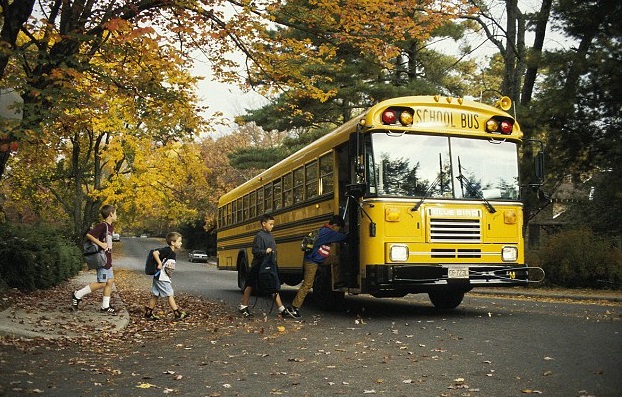 A first grader was dragged for almost a mile down the road by a school bus after the driver accidentally closed the door on her arm.

The substitute driver only realized Chelsea Klepzig was trapped in the door when he arrived at the next stop in Forsyth County, North Carolina.

Incredibly, the six-year-old escaped with only minor injuries – despite being carried by the bus for the best part of a mile.

But her sneakers, which were ripped apart as her feet dragged on the ground, show what a lucky escape the first grader had.

The driver has now been suspended without pay as school officials decide whether to fire him.

Winston-Salem/Forsyth County Schools said in a statement they are ‘so thankful the student is OK and it was not worse.’

Little Chelsea had been returning home from Union Cross Elementary School on Monday afternoon when the horrific accident occurred.

Her grandmother was waiting at the Stonington Way Court bus stop, in Kernersville, to collect her, when the door closed on her granddaughter’s arm as she went to get off.

Horrified Estrella Klepzig chased after the bus in her car as Chelsea desperately clung on to the side with her feet and legs dragging on the ground.

‘I had to follow him,’ she told Fox 8[3]. ‘I kept flashing him to stop, stop because I didn’t see her feet anymore. [He] didn’t even give her a chance to move. She was still in the door.’

The bus only pulled up at the next stop at Pine Meadow Court where the doors finally opened and Chelsea fell to the ground.

The girl’s parents say she suffered just bruises and scratches in the incident but warned it could have been much worse.

‘If he was following any kind of procedure that he should be following, why didn’t he notice that my child didn’t make it around the front of the bus,’ Chelsea’s father, John Klepzig, told Fox 8.

‘It scared me. I didn’t know how to react to it,’ John said. ‘Just to realize what had happened to her, it just tore me up.’

They added that if less of her arm had been caught, she could have lost her grip and fallen beneath the vehicle.

None of the 17 other young students on the bus are believed to have witnessed the incident.

Officials from Winston-Salem/Forsyth County Schools have sent out letters to the parents of all those children on the bus to inform them of the incident.

They have also sent out separate notes to mothers and fathers of students who regularly ride the bus as well as everyone at Union Cross Elementary School.

The bus driver, who has not been named, had worked for the school system for 15 years before the incident. He has now been suspended without pay and has been recommended for dismissal.

Highway Patrol said that they are still investigating but no charges have yet been brought against the driver.

Winston-Salem/Forsyth County Schools said a note had been left for the school’s bus drivers to remind them of their training, which they receive annually.

Thank God all that occurred were very minor injuries!

I’m not the litigious type, but if there ever was a reason to sue a school district, it seems that dragging a little girl by her arm for a mile might just make the cut.