North Korea Issues SHOCKING Statement About Trump – No One Saw THIS Coming!

Should the U.S. be more isolated in terms of foreign policy? Donald Trump routinely asserts that America should be more self-interested. This is an assertion that is long overdue. However great the idea may be in theory, however, removing ourselves from international affairs may present an opportunity for despots and despicable world leaders to occupy the vacuum left behind. North Korean media is now voicing glee[1] at the notion that a Trump presidency might finally allow for the North to conquer the South. 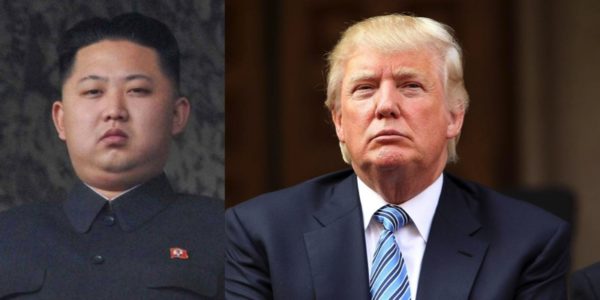 The editorial, reported by NKNews.org[3], touched on a number of Trump’s controversial policy proposals related to North Korea, including his admission that he would be willing to speak directly with North Korean leader Kim Jong Un in a sharp break with current U.S. policy toward the nation.

“In my personal opinion, there are many positive aspects to the Trump’s ‘inflammatory policies,’” Han Yong Mook, a purported Chinese North Korean scholar, wrote in the article.“Trump said ‘he will not get involved in the war between the South and the North,’ isn’t this fortunate from North Koreans’ perspective?”

Trump has made a number of contentious statements about North Korea, including telling[4]supporters at a rally in January that Kim Jong Un deserves “credit” for taking out his political rivals.

Trump has also indicated[5] that the United States should withdraw its military forces from Seoul if South Korea does not pay the U.S. “substantially” for protection. South Korea, which is still technically at war with North Korea, has covered some of the costs for U.S. troops in Seoul since the 1990s.

“Yes do it, now … Who knew that the slogan ‘Yankee Go Home’ would come true like this? The day when the ‘Yankee Go Home’ slogan becomes real would be the day of Korean Unification,” the piece read.

The editorial published Tuesday also recommended that the American public not vote for “dull” Hillary Clinton, the likely Democratic nominee for president.

“The president that U.S. citizens must vote for is not that dull Hillary–who claimed to adapt the Iranian model to resolve nuclear issues on the Korean Peninsula–but Trump, who spoke of holding direct conversation with North Korea,” the editorial explained.

Trump, who captured the number of delegates necessary to win the GOP nomination outright last week, has been scrutinized for his positions toward controversial world leaders, including Kim Jong Un and Russian President Vladimir Putin. Trump has exchanged[6] compliments with Putin despite Russia’s increased military provocations.

In this view, his position makes perfect sense. For decades, America has been both piggy bank and protector of the world. This service is not free and we should not be forced to go out-of-pocket for the privilege of keeping the world safe.

However, this perspective seems a bit naive when we consider the delicate alliances and balances of power that we have orchestrated for decades. Whether right or wrong, we have played an important role in crafting alliances and abandoning that position might not only be unwise, but downright dangerous.