Obama Caught Doing THIS in Cuba

Obama is in Cuba and what the media and his liberal supporters[1] are trying to portray is that it’s a “historic” visit… However, an official image of Obama’s visit says a whole lot about the administration and the President himself… 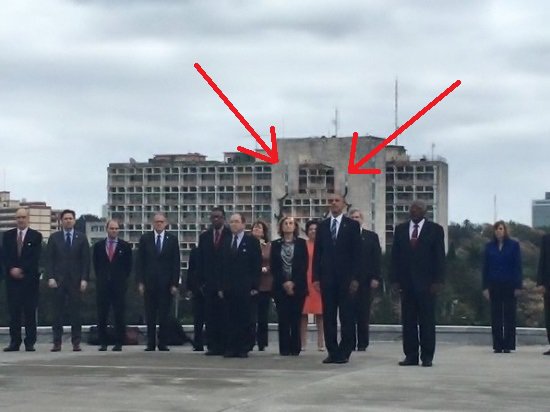 Obama is standing at attention in front of an image of Che Guevara. 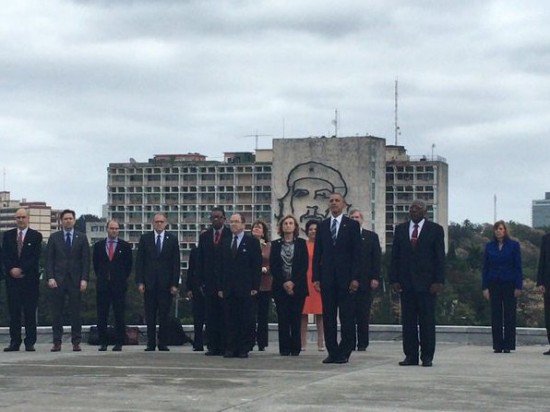 Here is a brief refresher provided by Humberto Fontova of Twonhall, on exactly who Che Guevara is – a hardcore, murderous oppressor.

In 1959, Cuba had a population of 6.4 million people (with a higher per capita income than most Europeans, by the way). According to Freedom House, 500,000 Cubans have passed through Cuba’s prison systems, proportionally more than went through Stalin’s Gulag. And many of Che Guevara’s political prisoners qualify as the longest-suffering political prisoners in modern history, having suffered prison camps, forced labor and torture chambers for a period three times as long in Fidel and Che’s Gulag as Alexander Solzhenitsyn suffered in Stalin’s.
The figures for the Che/Castro murders and jailings do not come from any “biased” Cuban-exile source. They’re available from “The Black Book of Communism,” authored by French scholars and translated into English by Harvard University Press, not exactly headquarters for any vast right-wing conspiracy.

“Executions?” Che Guevara exclaimed while addressing the hallowed halls of the U.N. General Assembly Dec. 9, 1964. “Certainly we execute!” he declared, to the claps and cheers of that august body. “And we will continue executing as long as it is necessary! This is a war to the death against the revolution’s enemies!”

According to the “Black Book of Communism,” those firing-squad executions had reached 14,000 by the end of the ’60s, the equivalent, given the relative populations, of more than 3 million executions in the U.S. “I don’t need proof to execute a man,” snapped Che to a judicial toady in 1959. “I only need proof that it’s necessary to execute him! … Judicial evidence is an archaic bourgeois detail. We execute from revolutionary conviction.”

Fortunately, Twitter user Michael Deppisch was kind enough to help make the image of Obama humbling himself in front of a communist murderer slightly more tolerable.

I wish the tweet made me feel better about the picture…