Obama: It’s Easier to Buy a Firearm than a Book or Vegetable

President Obama’s War on Guns[1] continued on Friday when he asserted that in some neighborhoods, it’s easier to acquire a firearm than a book or fresh vegetable. Now the distinction that he’s NOT going to make is that these would be illegal guns, as opposed to walking into a store and filling out all of the paperwork associated with becoming a gun owner. But somehow it’s the fault of the American people as a whole that these gang-bangers are getting hot guns and killing each other with them, instead of walking into a library or a grocery store. 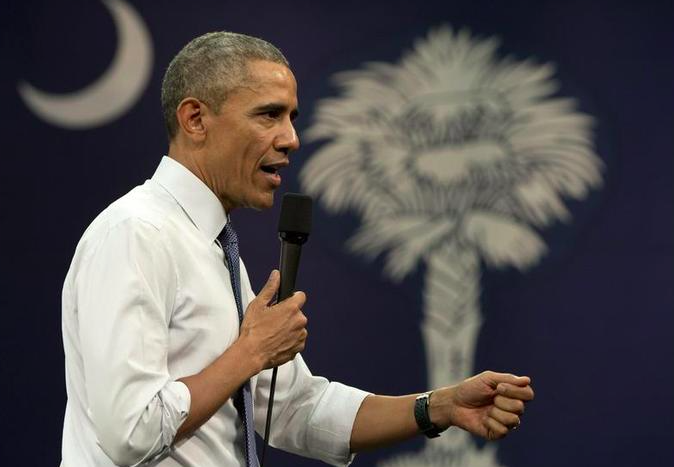 President Barack Obama launched a rhetorical assault on guns in one of the most gun friendly states in the nation while speaking at a town hall event in Columbia, South Carolina, Friday.

Obama vented his frustration that the administration-backed proposal on expanding background checks in 2013 did not pass Congress. It died in the Democratically-controlled Senate. Obama invoked the Newtown, Connecticut school shooting where 20 children were murdered.

“I thought after what happened at Sandy Hook would make us think about it,” Obama said. “You would have thought that’s got to be enough of a motivator. But we couldn’t get it done.”

Obama said without legislation at the state and federal level, “it is difficult to reduce the availability of guns.” In the absence of a bill from Congress, he said, “We’ve tried to get as much done administratively.”

“Our homicide rates are so much higher than other industrialized countries,” he added, and blamed the accessibility to guns for that. Though he offered an obligatory statement about wanting to protecting the Second Amendment. “That’s important. That’s part of who we are.”

“In some places it goes the opposite direction. People say we should have firearms in kindergarten and have machine guns in bars. You think I’m exaggerating,” Obama said. “You look at these laws that come up. Despite those frustrations, I would say it is still within our control to reduce the incidence of handguns violence by making sure your young people understand that that is not a sign of strength.”

I love being mocked by a President who is so far removed from the average American that he may as well be living on the moon. I’m sorry that not all of us have Secret Service-Level protection, or can afford armed bodyguards to make sure that if I need to make a run to the store at 10 pm, I’m not going to get attacked in the parking lot. Why don’t you target the problem communities, Mr. President? You’re painting an awful lot of people with an awfully broad brush, and it will come back to bite you in the future.