Obama Lashes Out After Planned Parenthood Shooting: ‘This Is Not Normal’ But it’s normal to kill the unborn? 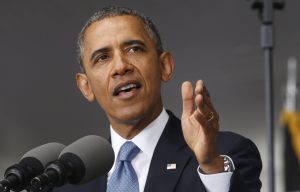 [1]I just thought I’ll add a question to the headline to underscore how our president has never met an abortion he didn’t like. This is not to excuse the shooter. I don’t know what his motivation was and neither does President Obama. But, that doesn’t prevent him from selectively opening his pie hole on matters that suit his agenda.

NBC News[2] reports President Barack Obama lamented the latest burst of gun violence in America — the shooting at a Colorado Planned Parenthood — and again called for the need for tighter gun control laws.

“If we truly care about this — if we’re going to offer up our thoughts and prayers again, for God knows how many times, with a truly clean conscience — then we have to do something about the easy accessibility of weapons of war on our streets to people who have no business wielding them,” Obama said in a statement Saturday. “Period. Enough is enough.”

So every time some whack-a-doodle kills people with a gun, law-abiding citizens should have a guilty conscience? That’s like me saying Obama should feel guilty about handing over nuclear weapons to Iran on a silver platter. I don’t think he feels guilty about it one bit.