President Obama holds little regard for America. From his flippant attitude towards paying respect to the flag to his infamous “coffee cup salute” of Marines, it’s evident that America is not an idea for him- just a place he keeps his stuff. His latest gaffe illustrates this fact:[1] 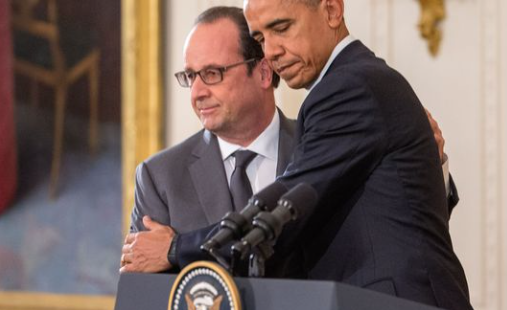 President Obama misquoted the inscription on the Statue of Liberty, ever so slightly, while making a point Tuesday about America’s enduring alliance with France and his contested plan to accept Syrian refugees.

At a White House press conference with French President Francois Hollande, Mr. Obama said the statue — a gift from France to the U.S. — is a symbol of welcome to those seeking a better life in America. Then he said Lady Liberty bears an inscription of “words we know so well.”

“Give me your tired, your poor, your huddled masses yearning to be free,” Mr. Obama quoted the inscription as saying.

Actually, the inscription on the Statue of Liberty reads, “masses yearning to breathe free,” not “be free.”

Mr. Obama noted that France has agreed to accept 30,000 Syrian refugees, while the House has voted to delay his plan to take in 10,000 refugees.

Liberals have a habit of cherry-picking inspirational quotes that they believe support their conclusions. How many times have we heard “separation of church and state” as if it were an ironclad bedrock principle of our Constitution?

The phrase, instead, cannot be seen in the Constitution or the Declaration of Independence. The phrase is in a personal letter Thomas Jefferson wrote and does not exist within our system of government.
Still, the left cites it like gospel. Similarly, between Obama’s “57 states” and “corpse-man” remarks and his latest weak paraphrasing, it seems Obama knows less about America than he does economics.

Did I know the exact wording of the inscription on the Statue of Liberty? No, but I was not the one addressing the world and if I were, I sure as hell would have at least Googled what I was referencing.