Remember when Ronald Reagan stood toe-to-toe with the Soviets? Like him or hate him, one thing is for certain: Ronald Reagan knew how to counter aggression. When he compare his gutsy foreign policy to that of Obama[1], it’s painful to see how far we have fallen: 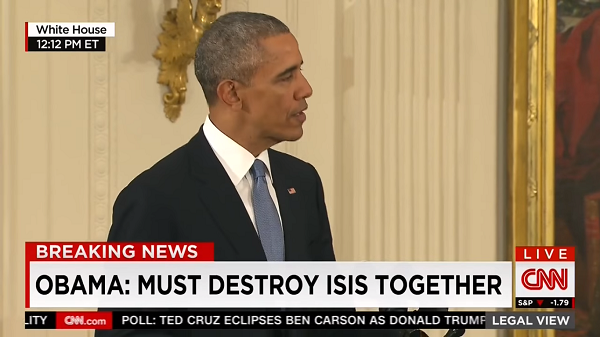 In a joint press conference with France’s president, Obama made the most absurd claim that proves he’s just not taking the ISIS threat seriously at all.

He literally says that it’s a “powerful rebuke” to terrorists that the world’s leaders will meet to talk about GLOBAL WARMING!!

I bet those ISIS terrorist pigs are quaking in their boots – which happen to be spattered with the blood of Americans they’ve beheaded.

If only George W. Bush had the gastrointestinal fortitude that President Einstein has, he would have held TEN Global Warming conferences to defeat al-Qaeda!!

You know what might ACTUALLY be a “rebuke” to ISIS? If instead of convening the world’s leaders to talk about a hoax, get them together to talk about how they’re going to join forces to obliterate these degenerate terrorists!!

But I guess that wouldn’t be “hopey-changey” enough.

Do you remember when the British offered a “powerful rebuke” to the evils of Nazism? They didn’t sit down to a meeting to talk about the weather- they bombed the hell out of them.

If this is how Obama intends to provide for America’s safety in these troubling times, we may not make it until next November…