Obama Says The San Bernardino Attack May Not Be Terrorism, It May Just Be….

Can you even make a guess why President Obama just stated that the San Bernardino terrorist attacks weren’t terrorist attacks? It is absolutely SHOCKING to see the President create some cockamamie OTHER REASON [1]why the shootings may have occurred… 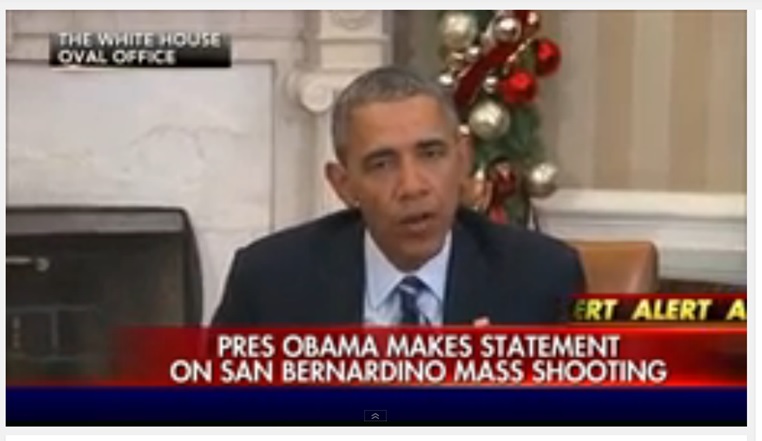 President says that the San Bernardino terrorist attacks could still end up being an act of workplace violence.
Let’s review what we know so far …..
• Police stated the couples home was an “IED factory.”
• Over a dozen pipe bombs have been disposed of by authorities – including devices taped to remote control cars.
• Syed Farook and Tashfeen Malik recently spent significant time in the Middle East.
• The weapons and bombs in the couples home has been valued at about $30,000, according to authorities. This was apparently purchased on Farook’s annual $40,000 civil servant salary.
With all those facts in mind, Obama stated, “We don’t know. It is also possible this was workplace related.” The president continued, “Right now, it’s just too easy,” he said referencing firearms. “We’re gonna have to, I think, search ourselves as a society to make sure we can take basic steps that would make it harder, not impossible, but harder, for individuals to get access to weapons.”
President Obama made no mention of making bombs and/or bomb-making materials harder to obtain – only firearms.
Former New York City mayor Rudy Guliani stated, “If you can’t come to a conclusion at this point that this was an act of terror … you’re a moron!”

Do you agree with Guliani that Obama is probably a moron or is there something deeper to investigate about the President here? I have been watching the media try desperately to make this LOOK like workplace violence. Can a moron by definition rise to Presidency? People… these news stories are all planned and coordinated– in this case the plan is to blame violent people with guns for the atrocity NOT terrorists with bombs. The agenda is #1 with Obama and if you can’t see THAT you are a moron!

WATCH Obama’s Press Conference HERE especially when he says THIS:
“We all have a part to play, search ourselves as a society to make sure we take basic steps to make it harder for individuals to get access to weapons”