NEVER let a crisis go to waste. That is the motto of Obama and his cronies. After a devastating natural disaster in Louisiana, Obama decided to use this opportunity to take a jab at the police and local officials. He’s really disgusting. 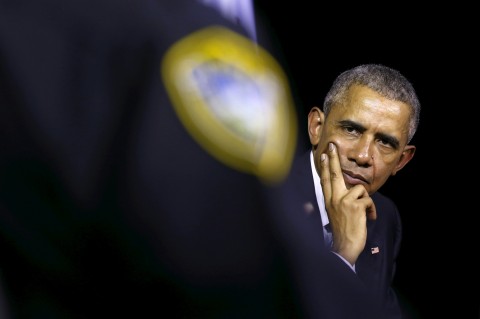 While Obama may still be on vacation – celebrating eight tumultuous years in office where he transformed America for the worse, no doubt – he had the nerve to let state and local officials know not to engage in racial discrimination.

Because everything is about race with the first black president.

President Obama has refused so far to survey the Louisiana flood disaster, but he did let state and local officials know that he’s watching to make sure they don’t engage in racial discrimination.

In a 16-page guidance issued Tuesday, the Obama administration, led by the Justice Department, warned Louisiana recipients of federal disaster assistance against engaging in “unlawful discrimination on the basis of race, color, or national origin (including limited English proficiency).”

The guidance’s frameworks “highlight the importance of complying with nondiscrimination requirements of civil rights statutes, addressing the needs of the whole community, and ensuring equal opportunity to access recovery efforts.”

Needless to say, some Louisiana residents were offended, including the American Conservative’s Rod Dreher, who took umbrage at receiving an anti-discrimination lecture from Washington, D.C., as locals struggle to rescue, house and feed their neighbors.

[E]verywhere you look you can find black folks and white folks loving on each other, helping each other through this crisis,” Mr. Dreher said in a Thursday post.

He referred to the guidance as a “long bureaucratic memo” issued by the “Department of Justice and many other agencies of the executive branch overseen by He Who Cannot Be Troubled to Leave Martha’s Vineyard.”

Mr. Obama has come under fire for sticking to his two-week golf vacation on Martha’s Vineyard instead of taking time to survey the flooding in the Baton Rouge area, which has left 13 dead.

Obama is the most discriminatory leader I have ever seen. He proved that despite being President of the United States, his golf clubs have top priority, not the American people. Additionally, he’s perfectly fine with offending local leaders on the ground who are busting their butts to serve the community by making the assumption that they are racist.