An Obama Supreme Court Appointee is Now Slamming Him, Here’s Why 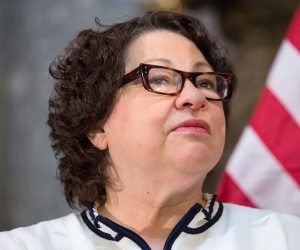 During a talk Friday at Brooklyn Law School, Sotomayor didn’t mention the nomination of Judge Merrick Garland, who is highly respected but wouldn’t add racial, religious, or educational diversity to the high court. But Sotomayor, the court’s first Latina justice, said “it is important that we have greater diversity on the Supreme Court” and in the legal profession.

“I, for one, do think there is a disadvantage from having (five) Catholics, three Jews, everyone from an Ivy League school,” several justices from New York City and no one who practiced criminal defense law outside white-collar settings, Sotomayor told the law school audience.

Sotomayor and some of her colleagues have said before that the high court could benefit from more diversity, but her remarks Friday come in the fraught context of a nomination in unusual limbo.

Since conservative Justice Antonin Scalia’s January death left Democratic President Barack Obama with the chance to fill a seat that could shift the court’s ideological balance, Senate Republicans have said they will not consider confirming anyone named before the November presidential election.

Some liberal groups hoped Obama, who had previously tapped Sotomayor and Justice Elena Kagan, would nominate another woman or minority. Instead, he tapped Merrick Garland, the chief judge of the U.S. Court of Appeals for the District of Columbia Circuit.

Garland, 63, is a white, Jewish former prosecutor with an Ivy League background and a career in the capital — and a centrist reputation the White House may have hoped would put pressure on Republicans to consider him.

The court needs more diversity? No. The court needs a commitment to FOLLOW the constitution. Stop making up rules and regulations for the sake of political correctness.