The race baiting never, ever stops:[1]

The widespread mistrust of law enforcement that was exposed by the fatal police shooting of an unarmed black man in Missouri exists in too many other communities and is having a corrosive effect on the nation, particularly on its children, President Barack Obama says. He blames the feeling of wariness on persistent racial disparities in the administration of justice.

Obama said these misgivings only serve to harm communities that are most in need of effective law enforcement.

“It makes folks who are victimized by crime and need strong policing reluctant to go to the police because they may not trust them,” he said Saturday night in an address at the Congressional Black Caucus Foundation’s annual awards dinner. […]

The shooting sparked days of violent protests and racial unrest in the predominantly black St. Louis suburb of Ferguson. The police officer who shot Brown was white.

“Too many young men of color feel targeted by law enforcement — guilty of walking while black or driving while black, judged by stereotypes that fuel fear and resentment and hopelessness,” said Obama, who has spoken of enduring similar treatment as a younger man.

He said significant racial disparities remain in the enforcement of law, from drug sentencing to application of the death penalty, and that a majority of Americans think the justice system treats people of different races unequally.

Funny. He didn’t worry about the racial disparities here: 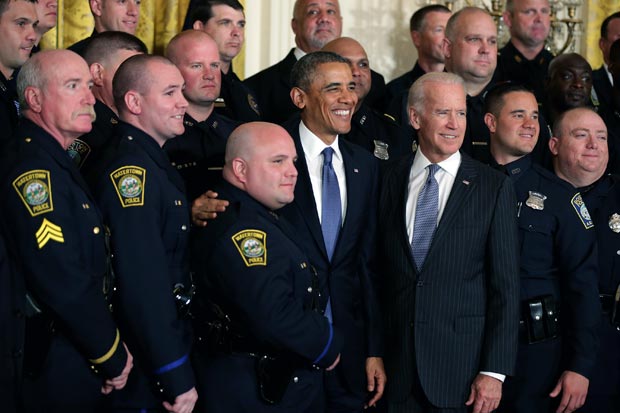 I wonder if he told all those white cops they needed a little color.