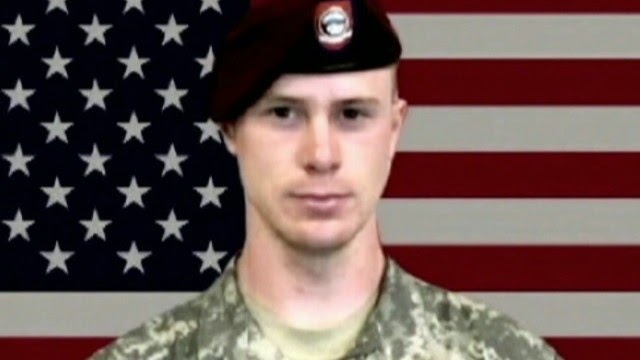 In a sane world, a president of the United States who authorized a trade of 5 Terrorists in exchange for a piece of filth by the name of Bowe Bergdahl[1], would be hounded out of office. But, we live in an insane world by which President Obama believes Bergdahl is a hero. That’s how much this country is in the toilet!

NewsMax[2]  reports U.S. Army Sergeant Bowe Bergdahl, a former Taliban prisoner in Afghanistan, was formally charged on Wednesday with desertion and misbehavior before the enemy, and could be sentenced to life in prison if convicted of the most serious count, the Army said.

Bergdahl’s attorney, Eugene Fidell of Yale Law School, said the Army had scheduled an Article 32 investigation hearing on April 22 to determine whether there was sufficient evidence to proceed with a court-martial.

The Army said the investigation, similar to a civilian grand jury proceeding, would take place at Fort Sam Houston in San Antonio, Texas.

Bergdahl, 28, was released from Taliban custody last summer in a controversial prisoner swap that saw five Taliban prisoners held at Guantanamo Bay, Cuba, transferred to Qatar, where they were required to remain for a year.

Special: How Older Men are Tightening their Skin and Looking Younger[3]

Bergdahl disappeared on June 30, 2009, from Combat Outpost Mest-Lalak in Paktika Province in eastern Afghanistan and was subsequently captured. He disappeared from the outpost early one morning after doing guard duty, leaving behind his gun, ammunition and body armor.

And we really should trust Obama negotiating with Iran?