It’s becoming Christmas season again, so you know what that means: The politically correct police are back in full swing trying to force everyone to say ‘Happy holidays’ instead of ‘Merry Christmas.’

Obama’s latest move to do this is[1] at a Veterans Affairs hospital: 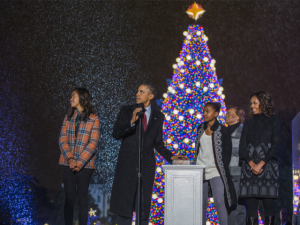 President Barack Obama’s Department of Veterans Affairs has banned employees at its facility in Salem, Virginia, from saying “Merry Christmas” to veterans.

It started as a broader ban that included Christmas trees. Federal law recognizes Christmas as an official federal holiday (5 U.S.C. § 6103) and provides federal employees with a paid day off to celebrate the Christian belief in the virgin birth of Jesus Christ.

Every year, a White House Christmas Tree and a Capitol Christmas Tree grace those two respective buildings in Washington D.C., and a National Christmas Tree is also officially lighted outdoors for the public to enjoy during that time of year.

Yet the “Executive Leadership Team” at the Salem VA Medical Center banned Christmas trees, as well as other Christian speech and celebrations. As reported[3] by local media, an email sent by senior staff to the center’s employees reads in part:

…Public areas may only be decorated in a manner that is celebratory of the winter season. Displays must not promote any religion. Please note that trees (regardless of the types of ornaments used) have been deemed to promote the Christian religion and will not be permitted in any public areas this year.

Just hours ago, pressure from the center’s employees caused the management team to cave on the Christmas tree ban. Christmas trees are back in at the facility.