It turns out that being a criminal carries certain occupational hazards when there are armed citizens nearby. A would-be bank robber in Georgia discovered this truth of life[1] when his plans were interrupted by an armed military veteran. 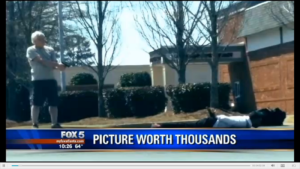 An alert customer noticed when 25-year-old Mark Katchem slipped a note to a Wells Fargo bank teller, demanding money. After Katchem left the store the customer—a military veteran—quickly went to his vehicle, grabbed his pistol, and put the young criminal nose-first on the ground.

Police say the customer ordered Katchem to the ground and held him there at gunpoint until police arrived. Nick Daley was driving by and took a photo of what was happening.

Daley says “I immediately knew by the way the man was standing, his stance, he was in control of the situation.”

When police arrived, they arrested Katchem and charged him with robbery by intimidation.

The local Fox affiliate in Atlanta [3]promised to have a follow up report about the armed veteran, but it’s probably safe to assume he’s a strong supporter of the right to keep and bear arms. The feckless bank robber, on the other hand, is probably wishing Michael Bloomberg would have been a little more successful in his gun control efforts.