The parents of a 15-month-old autistic baby were riding on a bus when they started singing the theme song from Peppa Pig to keep their child happy during the ride. The couple, Nick Barnfield and Sarah Cleaves, claim they were then aggressively approached by a Muslim woman in a jihab, who began yelling, upset over their song choice. 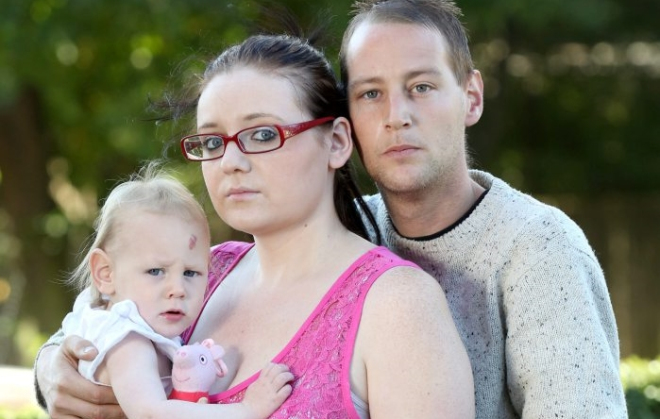 “A lady came up to us and quite aggressively started telling us we were irresponsible parents and that we were being racist singing the song,” Barnfield said. The popular cartoon which features a family of pigs, features a theme song where snorting sounds are made. The Muslim woman automatically thought the couple was being racist and assumed the song was a reference to Islam, which forbids the eating of pork. Irate, she took up her complaint with the bus driver:

“She went up to the bus driver and told him we were being racist towards her,” Barnfield said. “The driver came up to me and said we had to get off the bus or the police would have to come.”

The couple was extremely humiliated over the whole thing:

“We were really embarrassed, ashamed and upset and we hadn’t done anything wrong- just trying to make our little girl happy. But people were looking at us as if we had done something wrong,” Barnfield said. “He [the driver] just said, ‘Go now, otherwise you’ll hold up all the passengers and no-one will be happy,’” Barnfield added. An investigation into the incident by the bus company has begun, as the driver disputes the claim that the allegation of racism was a factor in his decision. Brandon Jones, head of external relations at the First bus group in Rotherham, England, said:

“The investigation is ongoing but we have viewed CCTV footage. It does show the customer leaving the bus at the location he describes and it does show a conversation between a lady customer on the bus and the driver, and the driver speaking to the customer. We’re speaking with our driver and with the customer to clarify the circumstances in which they left the bus. At this point I’m not in a position to confirm that they were forced to leave. It is clear they left the vehicle. The driver told us he heard no reference to racism but we are investigating the incident and have not yet drawn a conclusion,” Jones added.”

Ohhhhh goooooody. Next thing the Muslims will have the very ingenious tale of the Three Little Pigs banned from our childhoods where no one is allowed to say “huff and puff” and no one is allowed to mention that dirty wolf who goes around eating delicious bacon…er pigs.