Offensive Liberals: Faculty and students at U of San Diego Protest Trump By WEARING JEWISH STAR FOR MUSLIMS 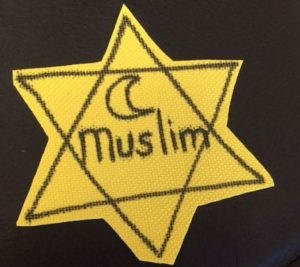 [1]Never underestimate the ability of Liberals to be offensive.

GatewayPundit[2] reports in an offensive act to Jews across the country, a few faculty members and students at one of our lovely colleges are protesting Donald Trump by wearing a Star of David marked with the word Muslim.

A religious studies professor at the University of San Diego is responding to anti-Muslim rhetoric by leading a silent protest on campus where students and faculty don yellow stars marked “Muslim.”
Bahar Davary, an associate professor whose academic specialty at the Catholic university is Islam, came up with the Star of David idea during her class “Islamic Faith and Practice,” the Times of San Diego reported.

Liberals live in a world where everything is in a vacuum. They’ll take a religious symbol, like the Star of David, to make a political point with no concept of how incoherent the idea is.

Muslims and Jews have been in conflict for centuries.

The state of Iran wants to destroy Israel. Palestinians refuse to recognize the state of Israel and wants them destroyed.

So here comes a wacky Far Left professor and his indoctrinated brain dead students thinking they can easily transpose an Islamic religious symbol into a Jewish religious symbol would somehow make Muslims more sympathetic. These are supposed to be educated people. But, with Libs there’s a chasm between intelligence and common sense.