We should all respect the role law enforcement officers play in keeping our communities safe. However, it’s clear that there are some in the law enforcement community (as in all professions) who take their role a bit too far. A recent report by the Blaze[1] details how one elderly couple endured a thorough interrogation regarding drug smuggling for having done, essentially, nothing wrong. 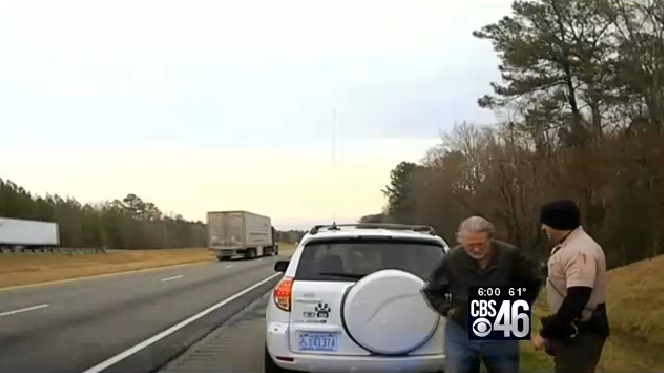 Charles Tharp, 69, and his wife were passing through Walton County after visiting their grandchild in Texas when a sheriff’s deputy pulled them over.

“It just seemed a little unusual because we’re not speeding and we’re always careful drivers,” Tharp recalled to WGCL-TV[3].

The elderly couple was told that their Toyota’s windows were tinted too dark, Tharp said. He added that he found it strange since the dealership said it was legal.

“I thought that was awfully strange since these are factory tinted Toyota windows and it seems so peculiar that someone would stop you for something like that,” the 69-year-old told WGCL.

Tharp — who has cancer — and his wife were then told to exit their car where the deputy proceeded to question them about smuggling drugs.

“I don’t honestly know what the stereotype looks like for a heroin smuggler, but I don’t think a couple of senior citizens driving a handicapped license plate car with their little cocker spaniel really looks like we’re much of a threat to anybody,” Tharp said.

The interrogation lasted for more than 20 minutes in the cold, according to the couple.

The traffic stop is now under review and the Walton County Sheriff’s Department said they have counseled the officer.

“Our deputy is trained to take an extra step,” chief deputy Keith Brooks told WGCL. “He is actually attached to our narcotics unit and he is primarily support for them. However, when he is out on the road and not supporting them, he conducts traffic stops. His primary function is to look for criminal activity.”

Tharp, however, said the experience has left a bitter taste in his mouth.

“I tell you what, I respect the law less today than I did before,” he said

Who knows what this officer was thinking; while there are many dedicated officers worthy of respect, it’s important that citizens are also keeping apprised of their rights and are willing to shine a light on officers who may have acted inappropriately.