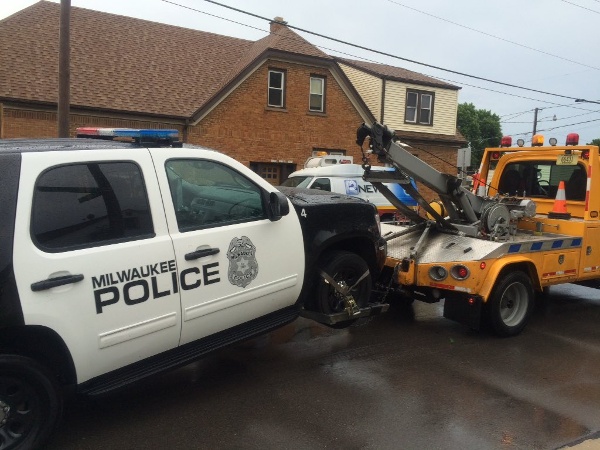 Police officers nationwide are putting their lives on the line to keep us all safe. And every day, they risk not coming home [2]to those who love them. Yet another officer was shot in the line of duty this week. Read on for details.

A Milwaukee police officer was shot in a “vicious” attack early Sunday as he sat in his squad car while colleagues investigated a domestic disturbance call, an official said.

The suspected shooter, identified by police as a 20-year-old West Allis man with two felonies on his record, was found dead in a nearby yard, they said.

The incident began as a response to a domestic disturbance call near South 17th Street and West Morgan Avenue at about 2 a.m. During that investigation, someone fired shots into the squad car, striking an officer “multiple” times,” Asst. Police Chief William Jessup said in a morning press conference.

Officer Brandon Baranowski, a 31-year-old man with 13 years of service, was taken to Froedtert Hospital for surgery. Milwaukee police Sergeant Tim Gauerke said the injuries were not life-threatening.

“This is just another example of the risks our officers take each and every day to protect these citizens,” Jessup said.

It was Baranowski’s bullet-proof vest that saved his life, Jessup explained at a Sunday Homicide Review Commission conference.

While investigating that shooting, officers on the scene heard gunshots and discovered the body of a young man in a nearby yard, Jessup said.

That man is the same person who was involved in both the domestic incident and the shooting of the police officer, police said.

He said it appeared that man’s death was a suicide.

Thankfully this officer was saved by his vest. The assault on our law enforcement officers must end. It is time to restore the rule of law and respect for human life, ALL human life. See video below.