Oklahoma Lawmakers Vote To Ban Advanced Placement U.S. History That Emphasizes “What is Bad about America.”

This certainly seems like a fine waste of time for our lawmakers. an optional course has Legislators up in arms in all kinds of ways[1]: 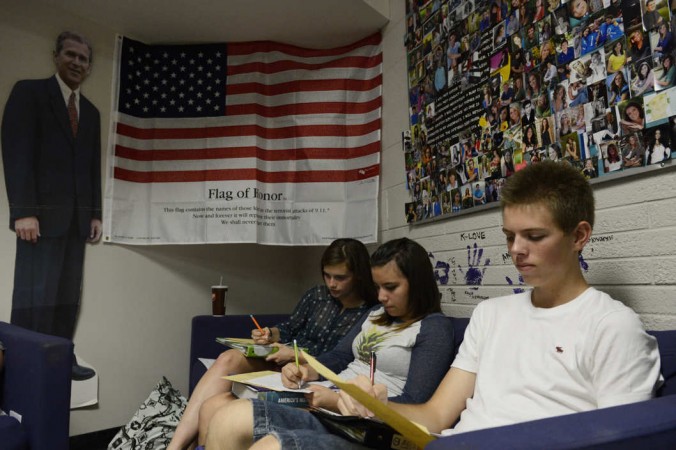 An Oklahoma legislative committee overwhelmingly voted to ban Advanced Placement U.S. History class, persuaded by the argument that it only teaches students “what is bad about America.” Other lawmakers are seeking a court ruling that would effectively prohibit the teaching of all AP courses in public schools.

Oklahoma Rep. Dan Fisher (R) has introduced “emergency” legislation “prohibiting the expenditure of funds on the Advanced Placement United States History course.” Fisher is part of a group called the “Black Robe Regiment” which argues “the church and God himself has been under assault, marginalized, and diminished by the progressives and secularists.” The group attacks the “false wall of separation of church and state.” The Black Robe Regiment claims that a “growing tide of special interest groups indoctrinating our youth at the exclusion of the Christian perspective.”

Fisher said the Advanced Placement history class fails to teach “American exceptionalism.” The bill passed the Oklahoma House Education committee on Monday on a vote of 11-4. You can read the actual course description for the course here[3].

For other lawmakers, however, Fisher is thinking too small. Oklahoma Rep. Sally Kern (R) claims that all “AP courses violate the legislation approved last year that repealed Common Core.” She has asked the Oklahoma Attorney General to issue a ruling. Kern argues that “AP courses are similar to Common Core, in that they could be construed as an attempt to impose a national curriculum on American schools.”

Advanced Placement courses are actually developed by a private group, the College Board, and are not required of any student or high school. They are the primary way that student can earn college credit in high school. Taking advanced placement course can save students money and are generally seen as a prerequisite to admission to elite colleges. A representative from the College Board called the claims by Fisher and others “mythology and not true.”

In August last year, the Republican National Committee blasted the Advanced Placement U.S. History test, claiming it “deliberately distorts and/or edits out important historical events.” The RNC said a new framework for the exam “reflects a radically revisionist view of American history that emphasizes negative aspects of our nation’s history while omitting or minimizing positive aspects.” The College Board countered that the framework had not been changed since 2012.

Efforts by conservative school board members in Colorado to make the Advanced Placement U.S. History course “more patriotic,” prompted a walk-out by students. Under the changes proposed in Colorado “students would only be taught lessons depicting American heritage in a positive light, and effectively ban any material that could lead to dissent.” In South Carolina conservatives asked the College Board to exclude any material with an “ideological bias,” including evolution. Similar efforts are underway in Georgia and North Carolina.

Yes. Let’s NOT try to give our kids every possible advantage if they are ready for it. Let’s continue to hold America as far back as we can from the rest of the world. Let’s continue to pander to ideals that don’t exist, like that any student is actually REQUIRED to take any of these courses. UGH. Give me a break. I’ll take free college credits over paying for them any day of the week.