An Old Man Tried to Shut Down a Kid’s Lemonade Stand, But it Backfired

A kid selling lemonade to make a few bucks used to be one of the most beloved parts of American childhood. The government has been trying to shut down this rite of passage, but most Americans loudly opposed such an idiotic idea — except, presumably, for Doug Wilkey, who tried to shut down one kid’s lemonade stand, only to have it completely blow up in his face. 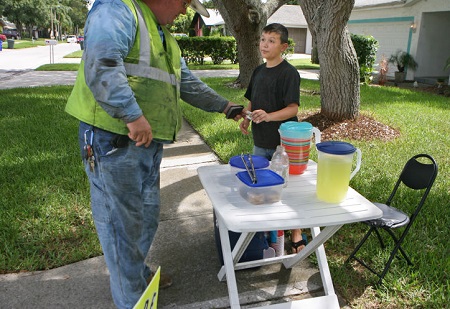 T.J. Guerrero is a 12 year old boy who likes to sell Country Time lemonade and fresh baked cookies to his friends and neighbors. Apparently his stand is slightly successful and attracts visitors as he sets the stand up every year. Why? The kid is working to save up for an iPod. His 61 year old neighbor, Doug Wilkey, however, thinks the kid’s lemonade stand is an ugly stain on his otherwise pristine neighborhood.

Wilkey was reported to have written numerous emails to Dunedin City Hall asking that authorities show up and shut down T.J.’s lemonade stand. His list of reasons include that the stand is a health risk, and that the visitors to the stand are loud and obnoxious. He said they light fireworks and spook his dog, as well as throw trash onto his lawn.

… Luckily for T.J. and anyone who enjoys homemade lemonade, Wilkie’s backfired on him as his ruckus to bring T.J.’s business to a halt generated a lot of buzz in the local community. Soon the little lemonade stand had visitors coming from all over to support the boy’s entrepreneurial spirit, and stick it to the man.

… Local authorities have responded to Wilkey’s requests by refusing to come between the kid and his business.

“We’re not in the business of trying to regulate kids like that; nor do we want to do any code enforcement like that.” said Dunedin planning and development director Greg Rice.

Due to T.J.’s plight becoming such a national sensation, the lemonade stand is now so successful that T.J. is giving some of his profits away to charity, and looking to give more.

If the story ended there it would be a happy one, but apparently fate decided that this cake needed icing.

It would appear that Wilkey himself also runs a private business out of his home just like his young neighbor. Hilariously, it’s been reported that Wilkey himself is operating his business and is being investigated by authorities. “The irony here is that (Wilkey’s) not following the rules either, or doesn’t seem to be.” said Rice.

Thank God that these authorities realized the value of hard work and entrepreneurship and didn’t bow down to the whims of a grumpy old man. Maybe next time Wilkey will worry more about his own business than crushing the dreams of a kid.