On The Night Of The Debate, Hillary Clinton Marched Up To Trump’s Doorstep To Did THIS

Hillary Clinton took her floundering campaign right to the GOP frontrunner this week when she held a press availability out in front of one of Donald Trump’s Las Vegas hotels[1] on Tuesday. The nerve of this woman…really!? After calling Trump a mere entertainer..she when on to say THIS! 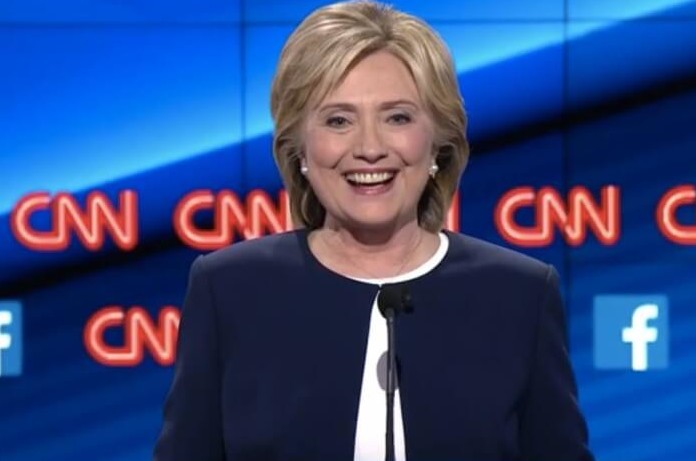 Clinton berated the real estate mogul for his stance on illegal immigration and unions.

Clinton took advantage of an invitation to speak before a protest sponsored by about 500 members of the Culinary Workers Union, which is trying to organize workers in Trump’s Vegas hotel. The former Secretary of State was the only Democrat candidate to accept the invite.

Urging workers to “say ‘No’ to Donald Trump,” Clinton denigrated Trump as a mere entertainer.

“If you are going to run for president, then represent all of the people of the United States,” she added. “I wanted to come by to lend my voice to all yours and I wish you well in these efforts.”

Clinton stressed that workers should have the right to unionize, and that she would protect those rights if elected to the White House.

The Culinary Workers Union has been trying to unionize Trump’s hotel workers for years, with seemingly little to show for the effort. In fact, Donald Trump’s son, Eric, said that the workers at the hotel are generally happy with their jobs.

“For years the union in Las Vegas has been trying to unionize this hotel, and they have been incredibly unsuccessful,” Trump said. “We have an incredible group of employees who have categorically rejected unionization.”

Hillary Clinton’s campaign has been bedeviled by sliding polls and dogged by persistent questions over her likely illegal use of private email servers when she was secretary of state. In one of the most recent polls, Clinton slid 10 points in the days just ahead of Tuesday’s Democrat debate.

Hillary I have TWO words for you….