One More Word on Those Angry Liberals

…whose anger, inexplicably, is on the rise still even as their power has now become dictatorial and uncontested. It defies all reason, common sense, rationalization, explanation — this is exactly the flavor of anger normal people might have when they lose control of things. After a slow and steady buildup throughout the last eleven years, the bile now runneth over…and their glorious revolution did nothing to stop its bubbling up, or even to slow it down. Instead, somehow, due to mysterious engimatic factors that will be studied by social scientists for generations, I think — the bubbling accelerated.

I came up with the words. Blogger friend Phil[1] supplied the labor. Now we have a bumper sticker:

Update 5/13/09: As if the point had not quite yet been made…along comes Karol[2], and look at what she found (hat tip to Conservative Grapevine). 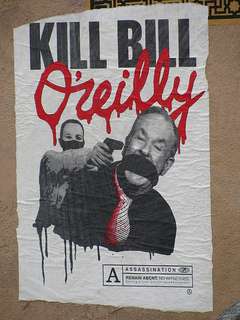 As that cute old adage says, there are two kinds of people in the world; those who divide us all into two kinds of people and those who don’t. Liberals seem to be unable to make up their minds about it. One minute they want to make a health care system and a tax code that will “work for everyone,” the next minute they want to annihilate half of us.

Update: Back on Cinco de Mayo, Amity Shlaes summed this up[3] very well:

In the past, politicians and policy thinkers tended to be magnanimous in victory. They and their friends focused, post- victory, on policy and strategy — not on trashing individuals.

It ought to be especially true this time, given what wonders are befalling the Democrats. Between Arlen Specter in Pennsylvania and Al Franken in Minnesota, it looks like the Democrats are in the process of making their Senate majority filibuster-proof. Then there’s the president’s new opportunity to mold the Supreme Court, with the resignation of David Souter.

Still, somehow, the magnanimity isn’t there. Indeed, the closer the Democrats get to total power, the nastier the commentators friendly to them have become.

Now to be fair about it, liberals worked just as hard to tell us how much their opponents suck, when the opponents were in power and the liberals were out of it; and although their tactics were childish, there was a certain logic in the strategy.

It seems to be a primal urge, almost a sexual thing. Meanwhile, isn’t there a cockpit at the front of this plane, a place where things have to be done to keep things under control? How come you’re back here in the coach section, Mister Pilot, jabbering away not quite so much about what a wonderful pilot you are, but about how much the other pilot sucks? Who’s flying this thing?