On the baseball field, it is never recommended to turn your back on the field, especially when you are sitting in the first few rows behind home plate.  In a sobering reminder of the danger that can exist on a baseball field when a woman took a foul tip right to the head. 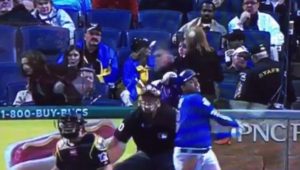 “A baseball fan has been taken to hospital on a stretcher after being hit in the head by a foul ball behind home plate.

The woman was watching the Pittsburgh Pirates take on the Chicago Cubs at PNC Park on Monday night when she was knocked unconscious.

She was making her way back to her seat during the second inning when the ball was hit behind by the Cubs’ Starlin Castro and careered into her head.

There was a net in place but, as she was standing so close, she was hit because of the slack.

The horrifying incident caused a 22-minute delay in the game as EMTs treated the fan – placing her in a head brace.

She was then transported to hospital having reportedly regained consciousness.

The Pittsburgh Pirates tweeted: ‘A scary moment here in the 2nd as a fan is hit with a foul ball.Our thoughts and prayers are with her tonight. “

Catching a foul ball is an exciting part of baseball.  Just not catching it with the back of your head.  Hope she has a speedy recovery and is back in her seats at the Pirates game soon.