President Obama has devastated America. By denouncing America’s immigration laws, he has signaled an “all clear” to illegals and drug cartel members to come on over to the U.S. whenever they please. This poses an incredible threat to the safety of Americans and while Obama refuses to recognize the mortal danger he has placed millions of Americans in, one man who takes his duties seriously, Arizona Sheriff Paul Babeu, has issued this warning for Memorial Day travelers.[1] 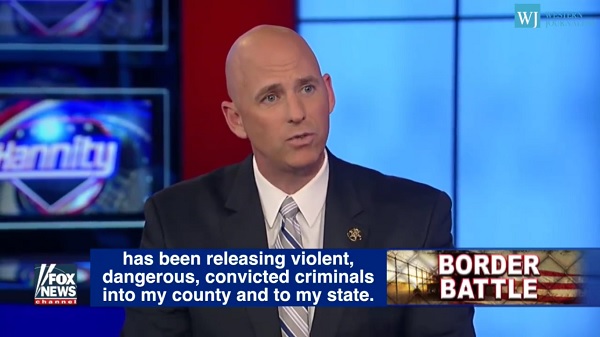 MIKE HUCKABEE: “Based on credible information about recent Mexican drug cartel violence, Sheriff Paul Babeu is warning campers, hikers, mountain bikers and all-terrain vehicle riders of the elevated risks of being out in certain areas of Pinal County this holiday weekend. Sheriff Babeu encourages those who are using the back roads, campsites and trails in the known smuggling corridors of western Pinal County to be very cautious and consider carrying a firearm when in these wilderness areas.”

BABEU: Look no further than the signs President Obama has erected in my county that literally, written in English, warn American citizens that it’s not safe to travel here. So, in law enforcement we call that a clue. And the president is literally, it’s a sign of surrendering, quite frankly, this area to the cartels instead of joining the fight with me and Border Patrol agents on the ground bringing a heavy hand of enforcement against these cartels. And the president, instead of helping us, instead of securing the border at the border, has been releasing violent, dangerous, convicted criminals into my county and to my state.

What President Obama has done is prioritize the plight of criminals from another country over the wellbeing and safety of the very people he has sworn to serve.

In this view, his actions are not merely unwise; they are treasonous and he should be removed from office (at the very least).