Pack of THUGS Attack Man… Watch Them Get a NASTY Surprise!

I love a story with a happy ending, especially when that happy ending[1] is some entitled brat getting his butt handed to him by a good person. If you’re like me, then you’ll want to stay tuned for the video. 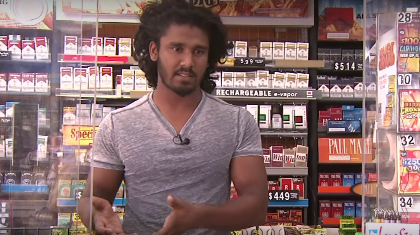 Most criminals commit crimes when they think the victim won’t be able to fight back[3]. However, many criminals never quite realize that others might witness their crimes and intervene to help[4] the victim.

A story from 2014 has begun recirculating on the Internet web, and was reported by KHON2[5], about an MMA fighter who witnessed his friend get mugged, and then stepped in to teach the muggers the definition of the word “pain.”

Mayura Dissanayaka was behind the counter at a gas station in Houston when he noticed his co-worker getting mugged[6] right outside the store.

His co-worker was returning from a run to the bank, and the robbers were waiting for him. They pulled up in an SUV and immediately attempted to take the money. That’s when Dissanayaka stepped in.

“The first guy I saw, I just kicked him in the face, then I punched the other guy,” explained Dissanayaka.

Dissanayaka managed to be so effective with his fighting moves that the criminals fled Well, except for one who got floored by one last punch from Dissanayaka and was quickly abandoned by his friends. He was eventually picked up by the cops.

Admit it, you found that satisfying, didn’t you?