OK, maybe I am alone in this, but why would you break into anything, anywhere in Texas and assume that no one was armed? Seems like common sense, I guess, but then again, this fool was breaking into a church of all thing[1]s: 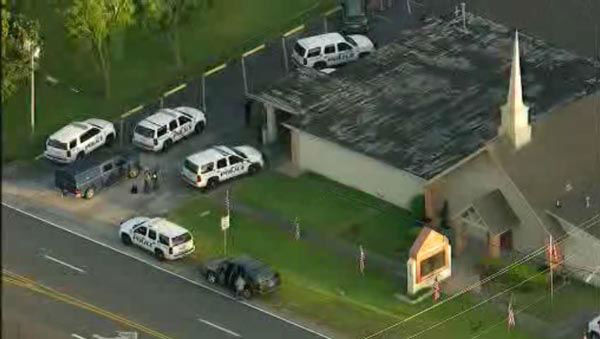 With churches being targeted by criminals, it is great to see pastors taking the necessary steps to protect themselves and their congregation.

A would-be burglar messed with the wrong church and pastor Tuesday. Baytown police say the man kicked in the door of the Church of New Beginnings early and attempted to rob it.

“We have church break-ins here in the city of Baytown,” said Pat Holmes. “But ours had never been broken into. Unfortunately today was the day.”

Around 6:15, police say a man broke into the Church of New Beginnings on North Alexander. Surveillance video shows the man breaking through the door. Little did he know that Pastor Benny Holmes was sleeping inside, and that he was strapped.

“I just want the public to know that this was a robbery,” Pastor Holmes told Eyewitness News exclusively. “He broke in the door, had laptops in his hand.”

Pastor Holmes said he woke up when he heard someone moving around in the church and grabbed his gun.

“I commanded him to stop twice, and he didn’t. So fearing for my life, I did what I had to do.”

And that was shoot. Baytown Police say Holmes shot the man in the right shoulder. They identified him as 27-year old Lee Marvin Blue Jr.

This is the second time Pastor Holmes has made headlines for stopping a would-be crook. In September, he caught a 52-year-old woman who had allegedly been stealing UPS packages off of porches in the area. She was trying to steal from his front porch, and he held her at gunpoint until police arrived to arrest her.

What could be considered the most surprising part of what happened this time around may be what happened while Blue was lying on the ground in his own blood.

Way to go, Pastor. You saved a soul AND stopped a robbery. Not even for the first time. God is truly lucky to have you as a member of his Holy Army. May God watch over you always.